What Comes After The Bigger Bang?
New Creator-Owned Series Explores The Cosmos 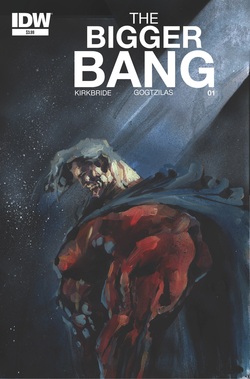 San Diego, CA (August 18, 2014) – In one explosive moment our universe was born—and with another it will be destroyed! This winter, writer D.J. Kirkbride (Amelia Cole) and illustrator Vassilis Gogtzilas (Adventures of Augusta Wind) team up for THE BIGGER BANG, a four-issue mini-series exploring the depths of humanity through the warped lens of an ever-expanding multiverse. This action-packed space fantasy defies the laws of science and the comforts of belief!

"My artistic pal Vassillis approached me about doing a comic with some kind of outer space superhero, and that pretty quickly became THE BIGGER BANG," says writer Kirkbride. "It's a comic about forging one's own destiny despite circumstances of birth or the past... starring a space god in orange tights, a three-eyed green warrior lady, and a Cthulhu in a flying space castle."

Created by an inexplicable universe-killing event, the being called Cosmos traverses the stars, seeking to help those he can in order to atone for the sins of his birth. Often mistaken for a harbinger, Cosmos soars the intergalactic space ways alone… but will soon find himself up against an alien tyrant on his quest for acceptance.

Series editor Justin Eisinger, most commonly found overseeing IDW's expansive line of books and graphic novels, described his experience as such: "THE BIGGER BANG is a story with heart and vision. The off-kilter pairing of Kirkbride's quirky writing and Gogtzilas' expressive, kinetic artwork work in perfect disharmony to bring this impossible story to improbable life. We sure hope you have as much fun reading BIGGER BANG as we're having making it."

﻿The Bigger Bang will light up comic shops beginning this November. Don’t miss out on this intergalactic epic!﻿

About IDW Publishing
IDW is an award-winning publisher of comic books, graphic novels and trade paperbacks, based in San Diego, California. Renowned for its diverse catalog of licensed and independent titles, IDW publishes some of the most successful and popular titles in the industry, including: Hasbro’s The TRANSFORMERS, G.I. JOE and MY LITTLE PONY; Paramount’s Star Trek; Nickelodeon’s Teenage Mutant Ninja Turtles; 2000AD’s Judge Dredd; The Rocketeer; Toho’s Godzilla; Wizards of the Coast’s Magic: The Gathering and Dungeons & Dragons; V-Wars from New York Times best-selling author Jonathan Maberry; Ragnarök from Eisner Award-winner Walter Simonson; Winterworld, created by Chuck Dixon and Jorge Zaffino; and Little Nemo from the award-winning duo of Eric Shanower and Gabriel Rodriguez. IDW is also home to the Library of American Comics imprint, which publishes classic comic reprints, Yoe! Books, a partnership with Yoe! Studio, and the multiple award-winning Artist's Edition imprint.