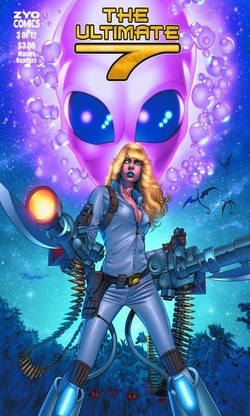 As you may recall from sometime ago that I reviewed the first issue of this series. And I’ve finally managed to get back around to finding the other 3 parts of this 12 issue run. Course that was after I was able to find them! The front covers done by Skottie Young, Mike Mayhew, and Ken Kelly are simply awesome. As they all give you a small taste of hints to come once you open up these books and get your read on!  Shawn Surface’s pencils are simply great from start to finish with no disappointments whatsoever. The colors done by Scott Shoemaker and Zac Atkinson are great through out all the pages. And you just got to love a cover that has a blonde girl with some big guns she’s about to use. Pity whoever she’s about to hurt! And so basically after the Big Bad of our story has left and lots of time has passed. At least to my understanding of things, the things his scientists had done on the planet previously has made for this universe’s version of the Human Race. Which gives us the lovely Jennifer Rocket. You’ve got to wonder though why no other race after all these years has managed to do something that would end the threat of the Big Bad and his forces.

I had actually quickly grown to like the character of Bubba. The way he does things with one of the invaders actually reminds me of a character from Mars Attacks. And kudos to whoever gets what I mean! And you know he would gain himself a spot in Valhalla for sure!  I have to wonder how the rest of the Human race will fare when the Overlord sends his forces back for a second try. Hopefully they’ll manage a better offensive! Perhaps whatever Jennifer and Mr. Pink Bubble are able to do will be enough? I certainly hope so! I have to say, I like the concept of the Homoagints, though I am curious if they are their only resource at all. How do they manage with a few things? I’m also curious on why they didn’t go for something a little more offensive with their various means of defensive actions. Especially since they knew about how the Overlord likes to use a giant meteor to make his point. Which, by the way. I am so glad something like him and his little friend doesn’t exist here! Otherwise… we’d all be doomed!

Personally though, I think issue 4 has to be my main favorite of the 4 parts of this book that I have. Cause you’ve got more alien/animal like races on a planet that Miss Rocket has to go too to find a certain kind of warrior. One among several others who apparently will be able to go round and round with the Overlord and his people. Which I admit has me rather curious on how all that is going to work out! Another reason I love issue 4 is some very obvious references from a certain saga we all know and love. And if you have read this already, you know exactly what I’m talking about! And if you haven’t read this issue or the ones before or after it. What are you waiting for!? You should definitely not be sleeping on this or even Zyo Comics as a whole! And boy… those Amphibians sure are some nasty fellows! Will the Clans unite? Will Jennifer be able to gather the ones needed to battle the Overlord? Will the Homoagints wreck havok from within? To find out the answers to these questions. Read on to find out! Otherwise you may miss out!