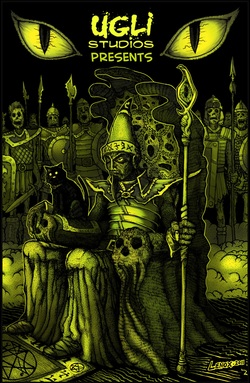 Summary: In the clutches of an army of would-be assassins the tyrant lord necromancer Amon Kadesh must survive the terrors of an assault on his fortress, while his cat familiar Grizelda seeks only the solitude of peace and comfort. At any cost.

Elsewhere, in the vast reaches of space, Commander Veer leads an Exterminus unit to locate and exterminate Scourge Species X2987, AKA The Great Vermin!

Review: Recently I had an opportunity to checkout a title from Ugli Studios. Not really sure what to expect, but knowing whatever it may be, it would turn out to be a good read. And it turns out I was right! Ugli Studios Presents two tales Through the Eyes of Grizelda and The Great Vermin. First up is Through the Eyes of Grizelda. The writing duties that Lenox and Paul helps give the impression about just how serious Grizelda is when she prefers things how they are now and possibly gives more reasons for cat haters to have issues against cats. The front cover on this is something I really like, it gives this great vibe to the comic. Jason Lenox’ art actually reminds me a bit of Stefano Cardoselli’s. And for those of you familiar with him, I imagine you’ll come to enjoy Jason’s art too. Dani Kaulakis' coloring work matches up very nicely! This comic will keep you wondering to the movements throughout the castle to how a giant cat could clear out the place. I am curious about Grizelda, is she a human being or just some kind of a very special cat? Hopefully that answer will come about one of these days!  Also for those of you that may not know, a Necromancer is someone with the ability to raise the dead. And command them to do whatever task that is needed.

The second story is The Great Vermin. The story will keep you wondering who’s in the suits, and may leave you surprised when you get to the end. Who knew they would be considered to be like the plague? And if you kill a guy’s wife, make sure you get him too. Because otherwise you’re liable to help doom your whole race. This story also leaves me very curious on why the two races (Which are of course us Humans and some Purple looking aliens.) aren’t able to get along and just want to outright kill the other. Maybe on down the road we’ll get that answer! This book also features some really nice pin up art as well. The art and writing are just as great as in the previous story, Through the Eyes of Grizelda.  There is also a little extra info for those curious about the characters in the Great Vermin. This is something you will want to pick up, as it would go great in any comic collection!
5 out of 5 Stars

P.S. And before I go, I’d like to mention that I will be doing an interview with David Paul himself! So stay tuned for that!
comments powered by Disqus
Powered by