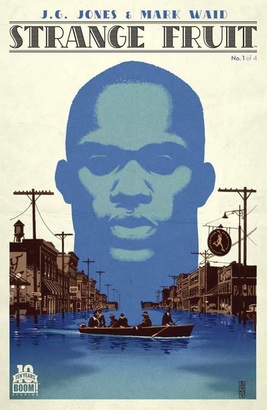 Summary: ﻿It's 1927 in Chatterlee, Mississippi, and the famous Mississippi River is overflowing and causing mass panic in several states. Many white men in power are using this opportunity to put the slaves to work, and the Klan in particular is hunting down one who is on the run for an crime they believe he committed. But as doomsday seems upon them, a strange force appears from the sky...
﻿
Review: J.G. Jones and Mark Waid are a powerhouse team, on their own they're both master storytellers, but together you would imagine they'd be able to tell a powerful, compelling and intriguing adventure. Especially one specifically set in the middle of a hot spot of American history.

Sadly though, while it's always possible the 4 issues as a whole will equal exactly what I expect from these two, the 1st issue alone feels rather boring, tame, and well, fruitless. Which is indeed strange. And it's not that it's a period drama that lets this comic down, or that there's very little heroics. In fact, there is a super powered character in this story – which I'll discuss in a moment – no, I think it is due to straight up boring characters.

Jones and Waid go for a more realistic take on this story, where there's no real “main character” and unfortunately this is from a time in history where everyone was kind of a bad guy, there's also no flowing story. Something happens, and characters react. It's all meant to form a cohesive narrative, but until the end there's just nothing to hold onto. The one thing that sets this story apart from your average, everyday period drama is at the end when a mysterious, nude black man with a godlike physique and super strength falls from the heavens and starts taking out KKK members.

Unfortunately, what could've been an entertaining moment is ruined when the man who was on the run from the KKK, Sunny's first reaction is that the man with super strength has a big “johnson” (that means penis) and needs to cover up, which he gives him a confederate flag to do so. Cue cliffhanger!

It's not an entirely bad comic though, Jones' art is top notch as ever. I've always loved his style. Like the story itself, his art is portrayed as realistic as you can get it – think in an Alex Ross fashion. I love it, and I also think it genuinely compliments the overall feel of the period. Speaking of which, this book also feels like it's taking place in 1927 and not some alternate version where there's that one thing that constantly makes life a little or a lot different. This feels like actual 1927 America, which is a great thing.

I just, I dunno, I wasn't feeling this one. It didn't seem on par with the kind of heavy-hitting stuff I know this power couple is capable of. I felt the ”twist” was really weak, the characters were bland, the story was bland, and that I had nothing to carry me through this adventure except for my outlook that it had to get good at some point, given who the creative force is.

If you like period dramas with a slight twist, you might enjoy this. If you like Waid or Jones in anyway, you might be able to overlook the discrepancies and enjoy this. Especially if you love Jones' art. Unfortunately, I was not able to overlook these issues I had with this issue, and I don't think I can find myself caring enough to read more. Which is a real shame.
Final Score: 1.5 Godlike Men out of 5
comments powered by Disqus
Powered by