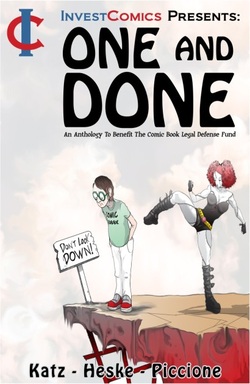 Summary: The One and Done Anthology is a charitable anthology to benefit the Comic Book Legal Defense Fund centered on one page stories involving all things Death. The Book also aims to help fight back against Censorship.

Review: One and Done is a book of one page stories that was put together by the team of Jay Katz, Robert Heske, and Sebastian Piccione. The book features a ton of talented writers and artists on each one page story. You may find yourself even wanting to look up more of their material after you've read this great piece of work! I love the idea for this book, as all proceeds for this helps fund the Comic Book Legal Defense Fund. And neat causes like that are always great! And speaking of Jay Katz, the man himself puts in an excellent welcoming intro to the book that just shouldn’t be ignored. While there’s no color in the book aside from the cover and back cover, I think the lack of it does this title a great favor. And speaking of the cover, it’s only a small taste of what its implying. And is a rather awesome cover if I might say so myself! We’ve got Gary T. Becks to thank for it as well! I admit that some of the stories in the book will make you want to scratch your head as you may not understand exactly what happened. Such as the nearly wordless story of 'Day 366 for example'. 'Shoot, Fly' is a great example of why you should never have your gun loaded when trying to kill something that’s a bit small. I think the Fly got the better end of the deal in that story! A personal big favorite of the stories in the book is called '…Cold'. And its mainly because I’m a Werewolf fan. So seeing a story about one is really cool, especially since he’s basically out for a bit of his own justice. Even though Death isn’t something we like to dwell on, it’s a big part of this book.

Whether it comes in the form of justice, accidental, or some other various ways. It certainly likes to show up in whatever way. And if you are a living embodiment of Death, I hope you’ll take your retirement much better than one character does in the book! You also get some extra stories in this title. One you may even find yourself familiar with from Bob Heske’s Cold Blooded Chillers book. And I am especially loving that there’s a 'JOSEPH!' strip in this. And if that’s not something you are familiar with, you certainly need to look up that web strip! And I like the idea of a wonderer who travels while taking care of not so human threats. Its something I would love to see more of in a comic. And hopefully the makers of 'Harkinton' are doing more of it. The crows honestly had me thinking of the Crow film, even though these two are practically un-related. Even if you aren’t a fan of Death, you should still get yourself a copy. As you may enjoy some of the moments you’ll come across as you read. Not to mention, your little donation will help the Defense Fund out! And it’s always nice to help out right!? To find out where you can order this book and help the Comic Book Legal Defense Fund, simply click on this link right here to to get your order on! http://investcomics.com/news/investcomics-one-and-done-anthology-now-available