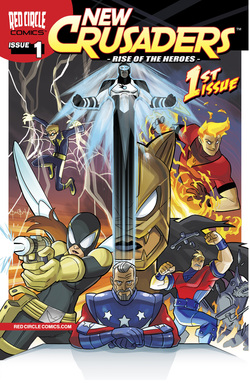 Summary: The Mighty Crusaders achieved the dream of peace and went into retirement. And now years later a devastating attack on the team happens, causing their children to step in to the roles of their parents. Will success be had? Or will it all fail?

Review: This is one of those kinds of comic books you see on a stand at a comic shop and despite not being entirely familiar with the publisher it´s under or any of the characters you still take a chance on it. Or you don't for whatever reason that only makes sense to you. Me on the other hand, I came across this title and its first 3 issues by pure luck and seeing it to be the most interesting find I had happened to come across other then the first volume of the Astounding Wolf Man from Image Comics. After having had the chance to finally get around to reading the 3 issues, I'm really glad I did buy them as they proved to be worth taking the chance on.

Not only are the colors, inks, and art done really well by Ben Bates, Alitha Martinez, Gary Martin, and Matt Herms, but the characters in the book are done especially well. The teenagers in it don't immediately just jump up and be all for becoming Super Heroes, and when they eventually do go for it. It´s not a walk in the park either to becoming one. it´s something of a journey that is easily believable and makes you feel like you're along for the ride every single step of the way. Even with The Shield himself who has flaws that one will quickly realize about him as the story starts to go onward from issue 1.

When I learned this was based on an older title from the 40's, I wound up going on a search for information and quickly learned more then what I thought I would. Got to love the wonders of Wikipedia. And for someone who is as old as The Shield is, he's certainly in good health! Wonder if its really all the Veggies he's had over the years? This guy is practically the father or grandfather even of Patriotic Superheroes in the world of Comics. And the fact he's got to deal with a new team of heroes who are far younger then he is, you know he's in for some major headaches! Although why an old team mate of his would give an Orphan girl he works with a mask with a link to a very unpleasant Cat like looking God is beyond me. That critter just wouldn't be someone I would want to be around!

And I get the feeling its going to take some major convincing to get Ivette to put that mask back on and face the God head on! But I am probably getting a bit ahead of myself here and I apologize for that good folks! Issue one essentially, as all issue ones tend to do, gets the ball rolling with the characters who we all will soon be familiar with. Not to mention giving me a few good chuckles during the football game the teens are having while their parents go and chat about old times like old folks tend to do when their all together in one place.

These are people who have managed to do what groups like the Avengers and the Justice League have been trying to do for years. And that is put a stop to the Big Bads of the World and the Universe. Or at least the World anyway for the most part. And be able to enjoy the peace their efforts brought them. Such as having started up their own little town live out their lives in. A town that just so happens to share the same name as the publisher. Which, has me somewhat reminded of Eureka.

Only of course with out all the crazy Science related incidents. Granted it seems like there might be issues with one or two former teammates, but its never really expanded on more. I imagine whatever went down will possibly be explored in later issues, issues I'm gonna have to get one of these days. And our resident retired heroes are all having a blast at a get together, and of course naturally like with some parties. Someone has to crash it and ruin it for everyone else! The fact he can get into your brain makes it even worse! 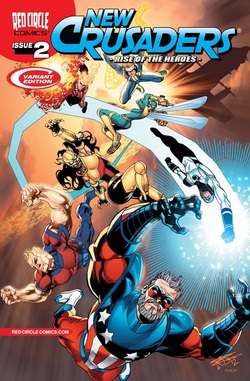 I love that after the end of each issue, it gives us a little something extra special for readers to get a little kick out of. Red Circle certainly seems to love going the extra mile for fans! Now, one of the few issues I did have with this book after the aftermath of Brain Emperor's attack is the lack of grief and mourning by the kids. Granted, there was a small bit but I kind of would think there would be a bit more then what we get. I know one thing though, Alex Tyler is certainly a hot head! Which will probably fit him perfectly for what he seems to become later on judging by his appearance on the covers of all 3 issues.

I like how Shield pulls a very clever move on the kids once he gets them settled in, although I did kind of find it unlikely they would all watch out for each other like that. But then again considering that they all seem to have a history with one another it makes sense they would do that. Their lack of belief in him is almost Mighty Morphin' Power Rangers like, only with the Rangers they weren't going through a lot of grief over the loss they just experienced. Now I personally think the best part of issue 2 was the introduction of Dusty and the reactions of the kids towards him.

Those lovely pre-team tensions, complete with a talking monkey watching on! 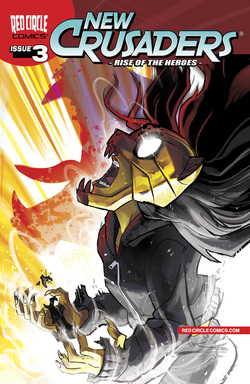 Reading through these again has me realizing that Greg could easily be the leader of the new generation once Shield finally does decide to retire. Well after some training and gaining experience as time goes on anyway. And naturally he's bound to make some mistakes, the fact he does it along side Alex the hot head is fairly nice too. And goes to show you should never drink strange liquids just because you know it'll give you powers! I want to take a brief moment and mention how much I love the covers on each book. They show everyone really well and it doesn't look crowded either. Issue 3's cover which has Ivette on there shows a small fraction of just what the readers are in for!

Which brings me to an earlier point about Ivette being given a mask with a link to a Cat like God. Issue 3 is when we really get to see how the team starts to shape up, naturally of course there's going to be issues and as mentioned before, moments of hot headedness where you do things you really shouldn't. And I think only Kelly really has it easy, well next to Wyatt anyway who seems to have a fairly interesting power. I do kind of wonder though if Kelly's mentor Bob Phantom is her father who's mentioned as not being around at one point. 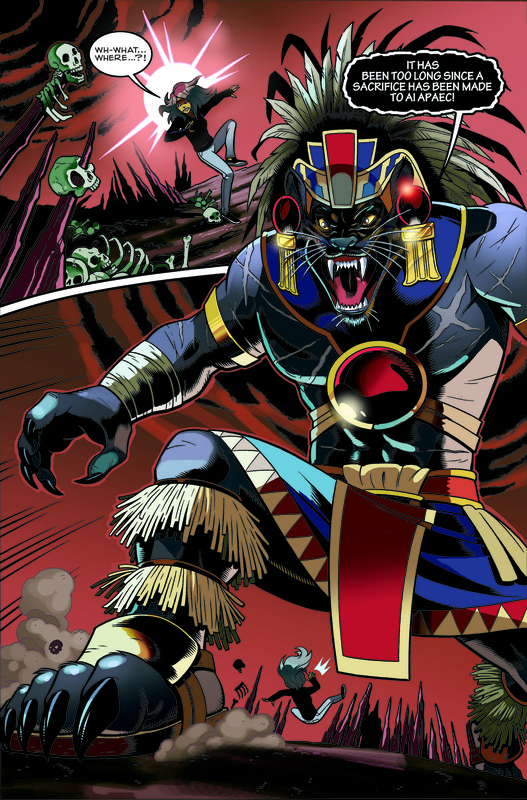 Oh my kitty, what big teeth you got there! 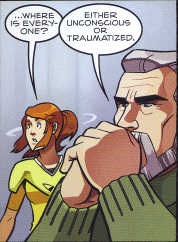 Sums up things nicely!
It makes perfect sense at least for me in my mind anyway that he would be the one to help teach her. Wyatt's 'Strand Sense' is something I'm curous on as to how he got it since his parents didn't have powers. Possibly something readers will get to know about later on. Now personally, if I was The Shield, I would have stuck with Ivette while she visited the Jaguar spirit in the mask she's given. Since that critter as I mentioned earlier is really not all that pleasant. Unless its just all a test, which would make sense. Naturally since The Shield is mostly doing things on his own with limited help from Dusty, he can only do so much.

I know I am looking forward to seeing how Alex Sterling winds up going Super, as I bet its going to take some serious cajoling on The Shield's part. Probably Kelly too since she's like the upbeat spunky girl of the group. As for whatever Brain Emperor's up too? I know it can't be nothing good! That and how the team really gets going in the right direction is something I myself can't wait to read more about. Again, I have to mention how Ian's writing is simply awesome. He does so well in making this story fantastic. So if you haven't picked up this sweet title, what are you waiting for!? Go and find this book as I honestly doubt you will regret it! Not to mention issue 3's Legacy story features a nice little tale on Fly-Girl that had me wanting to read more of her. I know one thing, Kelly is bound to do her mother's role very proud in my view!
5 out of 5 Stars

Editor's Note: To find out how you can read this sweet little title, head to the Red Circle site! 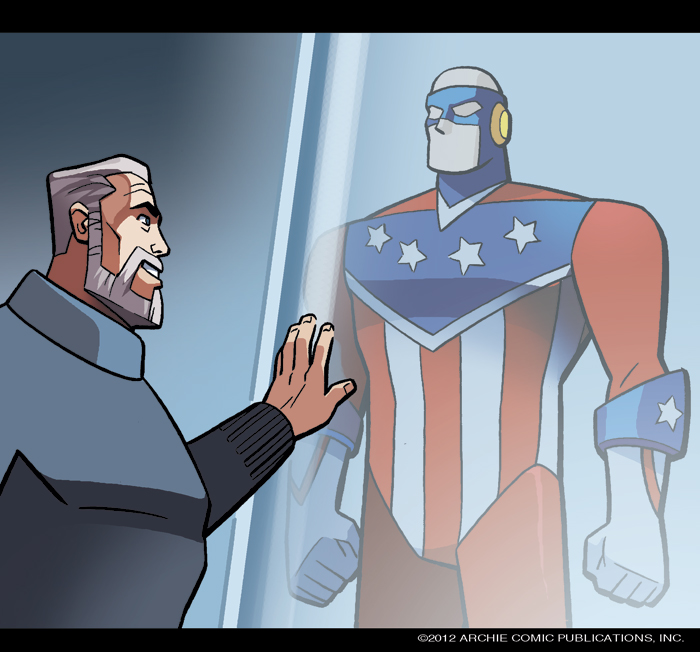 And of course, one can't forget The Shield being all nostalgic!
comments powered by Disqus
Powered by