Comics, clothing, and elements of Japanese culture such as anime and manga all intertwined into one being. A being that does it all with a style of their own making and all across the pond to boot! Who is this being you ask? Why none other then mayamada! And I had the recent chance to sit down and speak with co-founder Nigel Twumasi about all things mayamada! So if you're ready, let's begin! 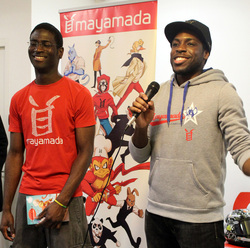 mayamada founders Nigel Twumasi and Lao K!
1. For those not familiar with you, could you tell us a bit about yourself?

I’m Nigel and I’m one of the co-founders of mayamada. We’re a story-based fashion brand inspired by Japanese anime and manga.

Our brand revolves around a fantasy television network world with an anthropomorphic cast of characters. We mix clothing with comics and original characters together in one interesting package.

As well as working to creating characters and stories, I also deal with the day to day running of the company.

2. Mayamada is based in the UK and is influenced by Japanese culture, what was the appeal from the Japanese Culture that made you decide it was what you wanted to use?

Both myself and my co-founder Lao grew up watching cartoons and anime, so the influence has been there for a while.

When we created mayamada we knew we wanted to incorporate stories into it. Our ideas are quite varied and unique, and Japanese anime and manga is where some of the most unique story and character ideas can be found.

We wanted to pay tribute to that as well as incorporate the cool visual style to create something original.

3. As I understand it, you had a Kickstarter recently for Samurai Chef that sadly failed in the end to raise enough money. Would you say it was something of a learning experience?

Yeah it definitely was! We’re now doing a new Kickstarter with a few differences to make sure we end up successful this time.

As new creators, we needed to rely on the support of friends and family to get the campaign off to a good start. But we discovered that although they wanted to support us, they didn’t have the same understanding as someone who has already backed 40 projects.

For example, during our campaign we found that some people didn't always understand that money is only taken at the end of a successful campaign, not immediately. Many were waiting to make pledges at the end of the month and when you're looking to build momentum for your project with early pledges it’s not what you want to hear!

We’ll be doing a better job of educating people and have also simplified the rewards so it is easier for backers to choose the best one for them.

As well as a more informational video, we can also added more character and comic artwork to the project to help people get a better understanding of what the project is for. Hopefully that will get more people invested enough to want to see more.

Failure is a good opportunity to learn and do better next time, and we’re looking forward to doing just that! 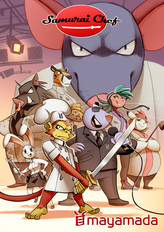 Issue 2 cover!
4. Its great to see you viewing things in a more positive way with the failed Kickstarter, along with anything you plan to do differently in the next Kickstarter you run. Which, after having checked out your newest Kickstarter, I am pleasantly surprised to see how well the new one is going! Do you think differences you made with the new one has helped out greatly in that?

We made a few important changes for the second Kickstarter. This included lowering the project goal and simplifying the rewards. We also decided to go with an informational video to leave potential backers with a clearer idea of what the project is about.

Maybe more than anything was the support from the first Kickstarter, even though it fell short it was a major factor in getting the second attempt off to a good start with early backers.

5. One of the mainstays of mayamada is the Samurai Chef, what brought on the combination of the two? And as a monkey?

We wanted to parody the cooking show format by having the food fight back during the judging phase. It wasn’t anything more complicated than that really!

As all of our characters are animals, we thought about what animal would be a good fit for this character. Monkeys are typically known as noisy and playful animals, the idea of a super serious monkey character that doesn't speak made for an interesting character to watch.

For us it's about being different and creative and using your imagination. That's what we want to promote, so it's what we always try to do.

6. What other titles can we expect to see from mayamada?

Once the Samurai Chef story has been wrapped up we'll begin releasing new stories in 2015. Those include stories called 11th Hour, Hot Lunch, and Serious.

11th Hour is a mystery story where four strangers become caught up in a plot put in motion by an unknown enemy.

Hot Lunch is a story centered around a crew of thieves aiming to bring down a shadowy cabal of elite chefs by pulling a series of carefully planned heists.

And Serious is about a group of young people that are out to make a success in the business world and break stereotypes along the way. It’s a bit of a meta story...

There are more waiting in the wings too, we want to make sure all our characters have their stories told. 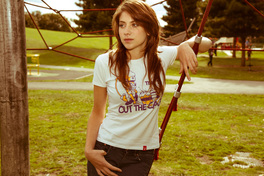 Cut The Cake Tee!
7. As you mentioned earlier about the added addition of clothing with your titles, what brought the idea of that on?

We have been creating t-shirt designs along side characters and stories from the beginning, that’s always been a part of mayamada. They all work together and for us the clothing is another way to present the brand and characters.

It was a personal choice because we like creating stories, but also wanted fashion that had a meaning behind it. Not just a t-shirt design that’s nice for the sake of it but fashion that has a story and some depth to it.

8. When it comes to Print vs. Digital, what's your own opinion on it?

Call me old fashioned but I still like physical books, I even have a bookshelf in my room! The feel of flicking through pages still appeals to me.

At the same time you can't deny the convenience of a digital book and it does looks like digital will take over physical in terms of which one people read most.

But digital books can feel throwaway and when it comes to creating something special like a graphic novel or collectors edition of a comic for example, you can't really recreate the tactile feedback you get from a printed comic or book.

9. If any there is any one thing you could go back and do differently, what would it be? And why?

I would have simplified the Kickstarter from the beginning. The changes we made for the second attempt ultimately helped make the project simpler to get on first glance. If we had done that the first time we might not have needed the second Kickstarter!

There's an important point that for new creators to remember, is that the vast majority of people won’t have heard of your comic so you have to present from that perspective and make it easy for potential backers to get on board. 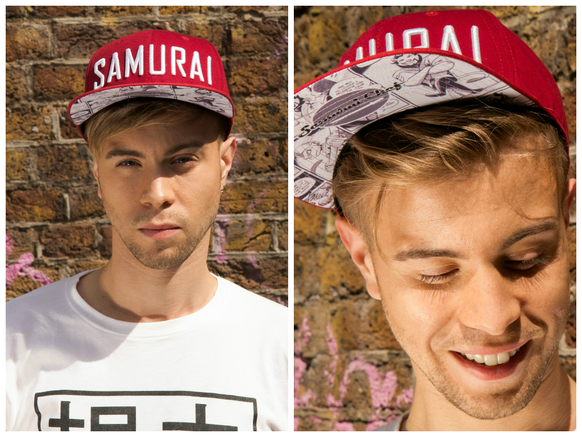 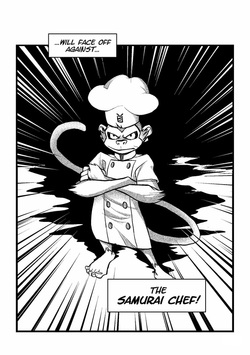 About to get serious!
10. Where do you hope to see yourself and mayamada in the next 5 years?

On the comic side of things we’ll have a full set of stories out in print, and digital of course! Samurai Chef is a big character for us but it's only the start! In 5 years we will have a full range of manga titles and as well as animation supporting them too.

On the fashion side we will have the brand stocked in major shops across the UK and also have your own shop which has always been a goal of mine.

11. And as for my final question, what advice would you give to those just starting out in the Industry? Especially those who may be looking to do something similar to mayamada?

Have a clear picture of what you want to achieve. Whether it's being a comic artist/writer or building up a business related to either, knowing where you want to end up will help you make the right decisions more often than not.

And the important thing is to keep at it. Keep practicing and learning and improving. Don't expect yourself to be perfect when you start, no one is so just make sure you do make a start and tackle your big vision bit by bit.

Oh and don't be afraid to ask for help when you need it... And you will need it.

Editor's Note: Currently on Kickstarter, mayamada has a fundraiser going for the Complete Samurai Chef Print Edition. Which is currently at 1,713 pounds of its initial 650 pound goal. With your continued help, the fundraiser can earn more to help further push their goals.
comments powered by Disqus
Powered by