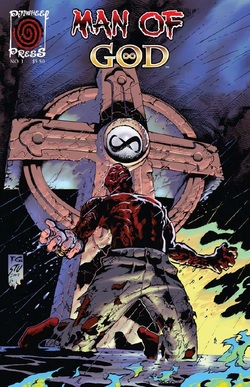 Summary: When a church fire claims the life of John Morris, it seems like just another story for the 10 o'clock news. But when John is reborn and tortured by the sins of those he touches, it becomes so much more. Burned beyond recognition, John flees into the night leaving devastation in his wake as he begins his search for the truth.

Review: Hello there, lovely readers! I am here to present you with a review of the horror comic “Man of God” written by Craig Partin with pencils by Yvel Guichet. Is it a horror masterpiece or just horrific?

The book follows a man named Al Simmons as he tries to figure out exactly what happened to him. His body is burnt beyond recognition and his memory is pretty much- Wait...

My mistake! See, I thought I was reviewing the first issue of Spawn. Because they’re very much alike. Yeah, you get the joke.

Like Spawn, our hero, John, has been set on fire and has come back with a set of powers, an ugly face and a wife who thinks he’s dead (he’s not THAT kind of priest).

Found in the burnt wreck of a church barely alive, John Morris is taken to a hospital where he soon dies of his wounds.

Investigating John’s murder is Detective Boone, a young go-getter who probably has a thing for our hero’s wife. That’s not hinted at in the story so much but the writing is so painfully predictable that the real shock would be if he doesn’t fall for her.

On a slab in the morgue with a slob of a coroner taking his ring. This ring is probably important since we’re treated to a close up of the infinity design on it.

His powers actually first come into play here and this is probably the only bit of the character that I found interesting.

Upon grabbing the slob by the neck and pushing him over, John’s treated to flashes of what this guy gets up to with the corpses (hint: sexy times). It’s later discovered that these people feel intense guilt over what they did, after being touched by John. This is a bit on the nose but interesting for a superhero.

After leaving, the mediocre opening scenes are drowned out by the incredibly dull monologue about masks and metaphors of masks and how he needs one and it’s filled with every cliché about masks you can think of. “We all wear masks... metaphorically speaking.” A little Mask quote for ya but not far off the crap John says.

This monologue, followed by an encounter with the owner of a mask store, is the lowest point of the book. But there’s a high point.

Near the end we’re introduced to an American in Russia. This man has paid a group of Russian thugs for the abduction of another man. When he turns up, he finds the man broken and beaten which our new American friend responds to by using mind control powers to have one thug kill the rest.

This part highlights the main reason I’m being so harsh on the book. I’m not just crapping on it for the sake of it; I’m crapping on it because Partin has potential. I can see that he has some great ideas and he knows how stories work but he’s wasting that here. One of the best things about being a critic is being able to say this stuff with a chance of being taken seriously.

So, while the story is boring at best, what about the art?

Well, the art is pretty darn good. It’s reminiscent of the books first published by Image in the 1990s and has a nice sharp, detailed look, making the characters stand out and at least look interesting.

Stu Berryhill’s inks help bring the art off the page, making the detail stand out without overdoing it. These two together help make the book at least look great.

So, it’s a crappy book with potential but it has fantastic art. I don’t suggest buying it but it might be worth keeping an eye out for future work by these guys.

Editor's Note: In addition to any future reviews here at IndieComiX, you can check out more of Ross' work over at Trash Mutant! And from what I hear, he's something of a Ninja too! And to check out where you can find yourself a copy of Man of God, head over to their Facebook page!

Editor's Note 2: In the on going path of helping promote the Indy Comic World. I've recently gained an Admin spot on the Independent Comic Promotions Project page on Facebook. Or ICPP for short. As the name suggests, the page is designed to help those in the Indies to promote their works to those who may not have heard of them in the past. So come on over to the ICPP page, give it a like, and join in on the fun!