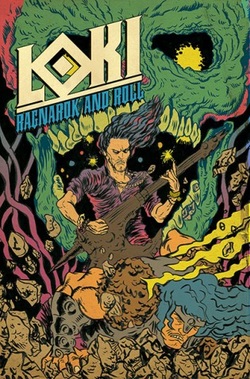 Summary: After his battle with many of the world’s gods, Loki seems more powerful than ever! But in Loki’s world there’s always some trick about to be pulled. But who is the trickster this time: Loki or someone else?

Review: After having read the 3rd issue sometime ago and frankly being shocked as Hell by what went down in it. I and other fans of this unfortunatey short lived title wound up experiencing a bit of a wait to see what happened next. Whether or not readers will be pleased by the final outcome in this 4th issue remains to be seen. As for myself (attempting to be spoiler free folks!), I'm a bit on the fence about it. On one side of things, Loki completely kicks all kinds of ass and nicely gives the Octopus Internet God (F.S.M. as he's also known as) some company at the same time. Which is a great way to show off your powers aside from decimating the crap out of your fellow Gods/Goddesses. And on the other side of the fence, the ending for me felt a little too happy endish/Disney like. I don't know, I guess I was just expecting more then what I should have. The little extra nudge Loki does with his fellow Gods/Goddesses was in my view a fantastic touch to end his short lived Supreme Godhood time. Especially since not only does he not have to deal with Thor's crap or the crap of the others, it means a bit of safety for those on Earth too.

Which is always a good thing for when you don't want meddling Gods in your life. Some beginning lines at the start of this had me laughing a bit, plus making me wonder if Eric had been seriously looking forward to using those lines about how one can be a little TOO METAL. Which is something I never ever thought I'd see! But I guess even Metal Heads have lines that shouldn't be crossed even if they don't know about it! The entire creative team for this book did a great job through out the whole mini-series in my view. Though I freely admit I am a bit saddened that this is only 4 issues long. But maybe Eric and Jerry will return one day to this little universe they've brung to readers and give us more. A big hope for sure! And as I mentioned earlier, I wasn't entirely happy with how the big finish was done. As I do felt there could have been more friction between Loki and his band, along with other potentially bad scenarios. Granted, its entirely possible my view of Loki is coming from the Marvel movies. So there's that for you. But despite my feelings on the ending and how it could or could not have gone, Eric managed to nicely leave things at a fairly good place. So if you don't get this on your weekly pull this week, you sir or ma'am simply need to get a little Rock in your lives! And that's the bottom line cause the Wrecks said so!
comments powered by Disqus
Powered by