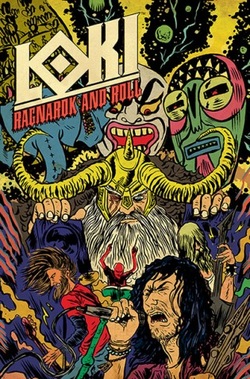 Summary: What happens when Loki goes from Norse god to rock god? Sex, fame, power! Loki becomes the world’s biggest rock star and gains a legion of devout worshippers! It’s a new experience for Loki. He likes it. The other gods? They don’t like it so much, as Loki soon learns…

Review: Well after having the chance to read the first issue recently, along with this issue. I have to say I am so far enjoying what I've read. I'm also pretty curious to see how they are going to pull off the ending of it too with only a four issue run. One of the things I am liking about this story is how it even includes Gods that you wouldn't even think would be allowed near the old Pantheons. Like the Flying Spaghetti Monster for example. And I didn't even know there is a Chinese God for male on male love unless Eric or Jerry came up with that. Something I may have to go searching out about. Along with a few other Gods that were mentioned in the first issue I hadn't really ever heard of. Kudos to Eric and Jerry for potentially starting up the interest of the readers in some Mythology! Heck the hammer Thor has would give the Marvel or any other version of the character hammer envy! The impression the first issue, along with the second one I wound up having of about both Odin and Thor is that both are seemingly uncaring jerks. Especially after Thor practically framed his own brother. So much for brotherhood folks!

The art and colors for both issues have so far been excellent as well. However, I don't think I could recommend this for kids as it seems more fitting for older teenagers and adults. While the first issue was more of an introductory issue that set things off, issue two is really more of where things really get going. Though I imagine if Odin even knew how much Loki was going to enjoy his banishment, he might have re-thought things! The rocker look for Loki really fits him, at least this version. The fact he's not even really a jerk or trying to usurp others is a nice touch. I can also see how this might anger some of the more hardcore Religious types out there in the world. Especially when one reporter starts questioning Loki, which I found that whole thing to be absolutely great. Though some of what Loki says is bound to anger some of the old guard, which is understandable because it more or less threatens them if everyone starts thinking of themselves in a certain way. And while lyrics aren't exactly shown in the dialogue, I am curious as to what those lyrics might actually be. But with the art, I have to mention again on how much it shines. Especially during the scenes with the band playing. I am curious though on just how much his band even actually believes Loki's claims of Godhood.

As it hasn't even really been shown if he has proven that to them or not. Unless they simply just don't care if he is or isn't. That he seems to prefer them over his own family is telling you a lot too. Then again, its easy to see why he may prefer them considering what we've seen so far from Odin and Thor. Hercules though, it seems like he needs a bit more brain power considering how small his head looks. Heck I think Loki deserves Mjolnir more than Thor does due to the more caring way Loki acts. So if you've yet to rock out Godhood style, then what are you waiting for!?
5 turned down Godhoods out of 5
comments powered by Disqus
Powered by