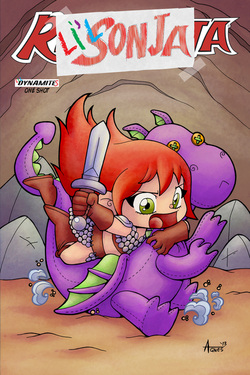 Summary: Li’l Sonja is the pup-hero of a bygone age, protector of the people and beater-upper of baddies. She’s everything you could ask for all wrapped up in a pint-size package and she’s here to save the day once more! When a whole helping of red-based items (and kids with red hair) go missing from a village one day, Li’l Sonja takes it upon herself to bring to justice whoever committed this dastardly crime. Has she found herself in more than she can chew?

Review: This one-shot was pretty dang fun. I see a lot of people complain about how there are no kid friendly comics in the industry these days. And while I know that isn’t true, as I can name a number of kid friendly comics out there, I will admit there are still majority that aren’t exactly ripe for kids just yet. That being said, it’s a fine line to walk between how comics used to be in the Golden and Silver age eras, where creators didn’t feel the need to dumb down their vocabulary for kids, and today when if a few words are anything above “the and she” libraries put them in the teens section (at least, that’s what it seems like to me).

That all being said, I do wish there was a more equal balance between kid friendly material and entertainment for an older audience as well when it comes to comics. These Li’l Dynamites one-shots are a step in the right direction, but perhaps we could launch these as mini-series or on-goings instead of just 5 different one-shots featuring pint-sized versions of older, not exactly suitable for all ages characters? Why not allow a parent or older sibling to share their love for the fantasy world of Red Sonja by letting them pick up a kids friendly version of the character every month as well next to the main title? The kid grows up loving the character, and when they’re older they can move over to the main title. It’s a win-win, simply put.

I totally think this book warrants that too. I found Li’l Sonja to be a very fun, very light read with a lot to enjoy in it. The covers are adorable, inviting you in to a chibi-fied world of fantasy, and then you’re met with Li’l Sonja doing exactly what she does best: kicking butt. The story features Sonja taking on a dragon that only loves the color red and how she gets out of it is pretty smart and fits in quite tonally with the atmosphere this world has. Where the adults don’t even question that there is a little armor-clad (and not sexually) girl running around, ready to take on an evil as big as that sort of behemoth.

It’s a perfect entry point for little kids. I found myself smiling quite often at the narrator’s way of introducing us to our hero, and there were plenty of tiny jokes in this to at least warrant a snicker. My biggest problem though, with this, as much as I want to continue singing its praises, is that it still feels way too short for its price. It’s not, oddly, coming in at 20 pages of story, but because it is made for kids the story is stretched out with minimal dialogue and words to fit the page count, so that it doesn’t feel like too much is going on. Kids these days have really short attention spans, heck I have a short attention span, so I understand the need here to fill as many pages as possible.

Alternatively, the best way to counteract this would perhaps to try and tell TWO Li’l Sonja stories in one issue, at least then it would feel worth the $3.99 price tag. If you wanted to keep the one story per issue format though, then, as these are marketed towards children, bring the price down to perhaps an affordable $1 as I’m sure there isn’t A LOT that goes into these books that makes me have to pay full price.

The art is a lot of fun as well. It reminds me a bit of Bryan Lee O’Malley in a sense (of Scott Pilgrim fame), or at least inspired by. It’s childish, not incredibly detailed, and cartoony enough to grasp onto without feeling “out there” if that makes sense at all. The dragon was of my personal favorite design. It looked big, slightly ugly, and more than enough of a foe for our li’l hero.

Before I end this, there is one thing that was featured in the middle of this book I want to talk about. As an extra, there is a Li’l Sonja board game (paper game?) that I tried out and surprisingly had even more fun with than the actual book. And despite it being just a small thing, this game actually took me and my girlfriend a whole hour to play twice. That’s not a lot of time for most people, but for the younger folk that’s an eternity of fun. A very nice addition, and I must admit I love when comic company’s decide to put these great little extras in their books. On top of a fun story, they can make the book totally worth the purchase price (sometimes).