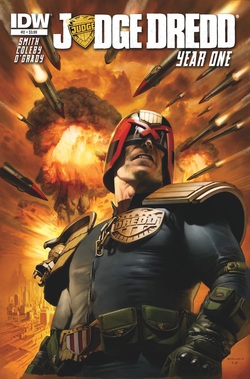 Summary: "The Long Hard Road," part 2. When juves across sector start manifesting psychic abilities, Dredd must team up for the first time with Psi-Division to combat the spreading chaos. But just what is causing the psi-outbreaks as it crosses the dimensions-and what does it have in store for Mega-City One?

Review: Ever since I read the first issue back in March, I've honesty been eagerly waiting for more of this book. As personally, more exposure to Judge Dredd is a darn good thing in my book as since about the only real exposure I've had to Dredd is a certain Stallone film from years past. Plus the recent new film which I thought was pretty darn good. If a sequel gets made, I honestly hope to see more of Anderson in it! And the fact that IDW is not only doing Ghostbusters but Dredd as well is just freaking awesome for me. I love the idea of getting to see a younger Dredd who's about to realize that the world isn't as black and white as it has always appeared to be. Helping to mold him into what many familiar fans are familiar with today. And personally I look forward to being more familiar with him as well as time goes on. The second cover for issue 2 is something I found pretty neat. Kind of like an old school 90's feel, and if anyone thinks I'm off my rocker in that thinking. Well feel free to tell me otherwise! I found an interview with the writer of this book to be fairly informative as well, as it helps me to better write this review.

I am rather liking the coloring and art being used by O'Grady and Coleby for this book. Not to mention it seems like there's only a certain amount of colors being used and its a nice touch. One thing though that seemed kind of odd was how it felt like Coleby seemed to make some of the Juves look too similar to one another. I'm not sure if this was intentional or otherwise. Course it could just be that they are young and its somehow throwing me off a bit due to the small use of colors in the book. I like that Matt is exploring an earlier time in Dredd's life. Especially one where he's being forced to think outside of the box so to speak. While comfort zones are nice and all, sometimes you just got to pop that bubble to experience something different. Unless you're having to confront a Wasp then just don't pop it and run in the other direction. Although the phenomenon Dredd's having to deal with is probably a bit more worse then a Wasp. Now if he winds up running into a half man half Wasp then that's bound to make for some interesting reading. And I could definitely see Matt doing something like that just to further test Dredd's mettle. I don't blame the bank for not being all that happy with how things went down with Dredd and the Juve.

But hey, things happen and sometimes there's not much you can do about it. Unless you have some kind of magic trick or some other such way to quickly fix things. I can only imagine how the thought of Revenge would be burning in that kid's mind after that encounter. Wonder if that'll be a possible thing later down the line? If so, its something to look forward too. I like that Goodman is willing to help breach the inexperience Dredd has and show him there's more then just what he's been taught. The fact that there's potential involvement with what looks like the Multi-Verse in what just might become a big problem for Dredd as this situation grows is a neat factor that Smith has thrown in. And its a subject I'm rather fond of myself. If you're easily offended when it comes to violence against kids, you may not want to read this. Despite the seriousness of the situation going on. I like that Smith is able to throw in a small bit of amusement. Even if that happens to come at Dredd's own expense.

Issue 2 ends with a cliffhanger of all things, and its going to be something that's going to be having me wanting to read the next issue as soon as possible to see what happens next. After all is said and done, I imagine Dredd's really going to be open to different things, even if its not something he'll entirely like. It'll be interesting to see how Riorden manages on his part as well. So if you haven't read this issue, or heck even the first one. I seriously recommend you to go out and grab yourself a copy of both! Even if you aren't a Dredd fan, do it anyway because someone else you know just might like it!
4 out of 5 Dimensional Issues
comments powered by Disqus
Powered by