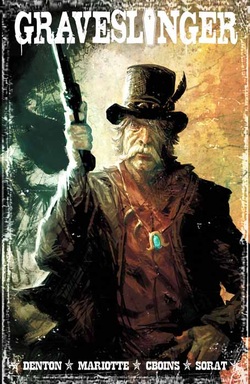 Summary: Accidentally releasing the souls of 117 executed killers from Hell would ruin anybody’s day. But for prison undertaker Frank Timmons, that’s just the beginning of his troubles. During their first murder spree, the undead killers have slain his beloved Dorothy, and the only way he can save her soul is to track them all down and send them back where they belong!

Review: I have got to admit it; this was a pretty fun comic. It’s a western setting and a unique take on the zombie genre I have yet seen, with the undead being depicted as smart, tactful, and fully operational with only their undead appearance and love of flesh giving them away. What also sets them apart though is that they are not a spreading disease, but brought back in a limited number by the inadvertent hands of the same man who buried them after they were hung in prison, the same man they cursed before they were hung for their crimes, and the only man who has been gifted by unknown forces with the power to kill them: Frank Timmons.

The story sees Frank, a man who is tired of being a soldier and only wants to make an honest living (despite some questionable looting he would do of the bodies before burial), he made a mistake and it cost him everything he was living for. Offered a way to get it all back, he took on the hunt to kill the very men he brought back to life. As he’s tracking a good two handfuls of these zombies, he finds himself also roped into a ranch war between an honest man and a tycoon who has bought the town and wants to see it all under control.

This is a tale of redemption, and regret. It is a tale showcasing a universal feeling we all experience at some point in our lives: what would you do to reconcile your mistakes? Some would go to the edge of the Earth… and Frank is that type of man. Thankfully Frank is also a very likeable character and we get to experience what makes him tick and what keeps him driven; which there is still plenty more to be found in story than I have divulged to find out. I found myself warmed up to our protagonist by the end of the story, even when the day is saved there is a crushing blow at the end that leaves me yearning for more of the story to be told.

As of this writing though, I do not believe there have been any other writings of the Graveslinger variety except for a mention of a crossover between Graveslinger and Desperadoes mentioned in the about the authors section. I may have to look into that. This book was published in 2009, so sad to say I may never get to see the continuing adventures of Frank and his epic journey to save Dorothy’s, and in one way, his own soul.

The art in Graveslinger varies, the opening style is by John Cboins for the first two issues is sketchy and at times hard to decipher about what is happening on the page, and who we should be focusing on. It’s very all over the place and not well focused but still fits the tone of the series with its sketchy nature. Preferably of the two though, I prefer Nima Sorat’s contribution to the final two issues who offers up a cleaner, easier to read but still near as sketchy style that I would rather see continue on as the style for the series. Although at one point even his art becomes indecipherable, though there is a lot going on in those scenes I’ll admit.