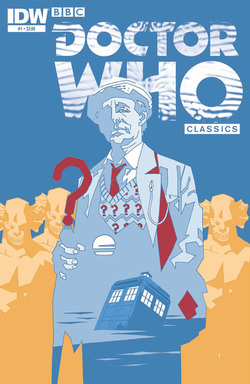 Summary: In the two adventures presented in this comic, are reprints of 2 adventures of the 7th incarnation of the Doctor from a few 1989 issues of Doctor Who Magazine, we see the Doctor teach a creature of another planet who has accepted its civilizations fate of extinction how to live on and to know that life is continually worth living, right up until the end. And in the second story the Doctor helps two goons from Earth’s near future track down the elusive Meddling Monk in a voyage across time.

Review: I have criminally seen very little of the Doctor’s classic stories, though I still have done plenty of research on all of his incarnations. The 7th Doctor incarnation is one that has intrigued me quite a bit, often seen by fans as the “evil” Doctor. Though from what I could tell he was just the version who was most unafraid of doing the dirty things the Doctor isn’t exactly known for. These stories don’t necessarily bring that point across, but as just tiny adventures in the long life of the Doctor, these are really meant to be enjoyable romps rather than be detrimental stories crucial to Who-lorians everywhere. And I’m fine with that, it’s one of the freeing aspects of Doctor Who I find so enjoyable, is that you can take the main character and place him in any situation in all of time and space and hardly ever have to worry about canonicity. One of the downsides to this though, is that TV show has all the power over whether the main characters live or die, so as long as the Doctor is alive in television show, he must never be allowed to die in comics, novels or anywhere otherwise. But that’s also challenging as it allows writers to challenge the reader into wondering how the Doctor then can escape his predicament, which can be a lot of fun when utilized right.

But these stories offer up very little fun in wondering how the Doctor will escape his perils, with little page space to deal with and some uninspired characters and stories, these adventures come off as pretty weak and bland. They’re pretty much by the book tales: the Doctor lands in some unknown planet or time period in Earth, meets something to keep him busy, and gets out of it with little to no effort. I did enjoy the alien species presented in the first story, as they represent what would more than likely happen to humanity if we were suddenly faced with our sudden extinction. Life would be deemed meaningless by man and so the killing sprees would begin (and they’d be for fun no less); it Is a haunting thought, though the story does teach us that in all the gloom and doom one truth prevails: if anyone survives, then the extinction of an entire race may not be lost after all. Though the Doctor in this story seems to have very little care if anyone dies; which is very unlike him.

In the second story, the Doctor encounters another time lord, The Monk or Meddling Monk, a foe who first appeared in a story with the first incarnation of the Doctor. The story sees the Monk on the run from the Doctor and a couple of goons who place the Doctor at gun point to chase after the Monk, after the Monk runs into their car causing it to crash. One thing that I am used to in Doctor Who is side characters the Doctor is forced to help out that are just plain pricks with no redeemable qualities to them. Doctor Who has them in abundance and this one is no different, the two goons seen here are sleaze balls to the end and are apparently the cause of several travesties/mysteries known to human history. Given these terrible events are treated as more of a comedy than anything I would rather mark this story up as non-canonical, even if it does have the Monk in it. The Monk too is very under used which had me sad by the end as I have really wanted to see more of his character for a while.

The art shown in these stories really aren’t that stellar, though being a reader of Doctor Who Magazine that has changed much from these 1989 stories to now. With so many artists on board the art really flows seamlessly together with not very many changes in the art style; normally that would be a good thing but when the art is very crude and jagged, more of that really isn’t what we need.

If you’re a fan of Doctor Who and wish to just read some fun romps, this isn’t too terrible, but if you’re hoping to get more out of your travels of your favorite Time Lord, then there is an incredible library of adventures out there waiting for you in other comics, audio adventures, novels, and of course the TV show proper.
Final Score: 2 Sleaze Ball Goons out of 5 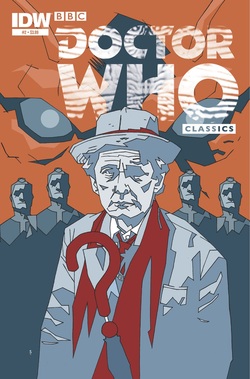 Summary: In another 1989 reprinted adventure, the 7th Doctor lands on Earth in 1992 to find himself in the middle of an alien invasion. The invaders from Gantac are after the fables treasure of Zantar Wrouth and will not stop at any means to get it, even if that means destroying the entire population of Earth. Now with the help of an unlikely sidekick in the way of Leapy the flea-ridden hobo the Doctor must find a way to save Earth or die trying.

Review: Let me start out by saying that this is a step above the last issue I reviewed, giving us a full story that sees the Doctor really at the mercy of others. The predicament he finds himself in finds a good use of the Doctor’s vast knowledge and also displays the old saying that no matter how trivial the knowledge, you never know when you’re going to need it. I found the villains of Gantac quite fun this issue, their spouting out orders and sub-orders was quite informative of how their race works. Foot soldiers to the end, live and die by command, which is also a mirror image of Earth’s society in a way. Which I’ve always thought Doctor Who villains worked best when they somehow remind us of ourselves as if seeing ourselves through alien eyes is the only way to wake us up about the way we live.

There was a lot of alien sci-fi in this as well which I always enjoy in the adventures of our favorite two-hearted creature, Leapy is a great character and though on one note I honestly would not mind seeing him pop up again somewhere, like the show if not for a one-liner about his fleas and the Doctor cowering away from them. I like when the Doctor encounters truly good people and sometimes they are in the guise of those we’d normally right off as humans not worth our time.

The one big problem I had though was that at one point near the end some of the Gantac invaders did not recognize the Doctor when they found him in a crowd and I wish that was explained, because there is really no reason they shouldn’t have. It felt contrived so that the story could get to its ending and wrap up. The art here was also very clean and detailed and worked well for the story. Looking at this artwork reminds me of Paul Pelletier’s style.
Final Score: 3 Gantac Invaders out of 5
comments powered by Disqus
Powered by