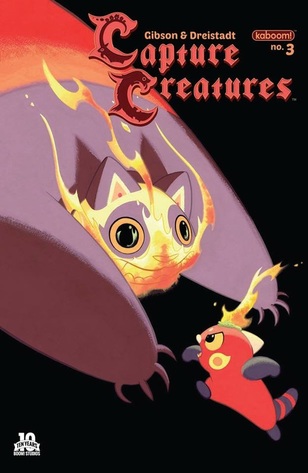 Review: With every issue I continue to have fun reading Capture Creatures. I find the art to be cute and enjoyable to look at, I also find the characters to be infectious with their endearing optimism, and the creatures are really cool to see. That being said, 4 issues in and I'm still having a bit of trouble following the story of Capture Creatures. There may be a key component I'm missing to fully understand what's going on, but since issue #1 its felt as if things have just been happening, and the twists and turns have just “happened” with no real build up, or ties to the “story” that this began with.

Maybe I'm just not paying enough attention? I don't know, but the series has felt really disconnected in some odd way. However, I have been having a lot of fun reading Capture Creatures and I'm really interested to see what comes next with the introduction of our Anubis-like villains, as well as what stems from a sort of vision that Tamzen ended up having on their way off the island.

Issues #3 and #4 bring an end to the first arc, as we get introduced to a whole host of new supporting characters, as well as we're treated to just how “adult” this comic can get when you least expect it. While still keeping with the childlike charm, unless I missed something I'm pretty sure one of the creatures got brutally killed in issue #4. And our characters simply swept it up as “Oh but the thing that killed Rusty wasn't really evil, he just had a bad owner.”

Now, I may be wrong on that and the next issue will prove to me that the creature is in fact not dead. I just don't know as we never see him again after his body is tossed aside.

Like I mentioned earlier, the art for this series is still one of the major highlights. I like everyone's look, and I am enjoying the cute, cuddlyness of all the creatures. I actually really want to see one evolve, if that's indeed what they do. I'm not really sure how the creatures change, but I would love to see it happen at some point.

Capture Creatures isn't a bad series. It's actually quite fun and energetic. There's just not a lot really holding it together, and I feel as if Gibson and Dreistadtare simply biding their time until they get to the really good stuff. Issue #4 introduced what looks like a possible future for Tamzen, and that seemed really interesting. I just don't know how much of this dwindled rope I can keep climbing until I reach that point. They have to give me something more from this point on.
Final Score: 2 Basic Level Capture Creatures out of 5 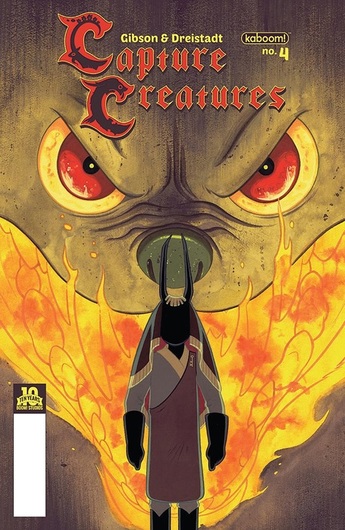