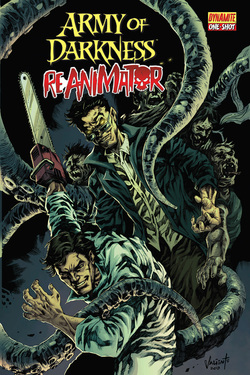 Summary: Ash is hurled into an American graveyard in the 1920s and meets an intense young doctor named Herbert West. If the name sounds familiar, West's obsessed with reanimating the dead at any cost. But he just can't seem to find corpses that are fresh enough. It's H.P. Lovecraft's New England - and his bizarre original short story as the source material. Bonus! Also, featuring a reprint of Reanimator #0!

Review: I recently re-watched DREDD after reading an interview with the character’s co-creator John Wagner in Super Heroes #18. It’s funny that the audiences for both DREDD and the Stallone movie (JUDGE DREDD) have been so polarized. Stallone’s film has its defenders. It’s not a perfect movie but there are things I still like about it. But as comics-to-film adaptations go DREDD is perfect. There isn’t anything about DREDD that isn’t Dredd.

Wagner was quoted saying he hated almost everything about the Stallone movie but he praised the recent DREDD.

As a comics creator I have not had Wagner’s experience. I can’t imagine what it is like to have a character you’ve created cultivated and adapted for a movie. I think all comics creators these days imagine what it would be like. If it’s live-action we imagine who we’d like to see play the various characters. Or if it’s animation we imagine which studio we’d want to bring it to the big screen (or small screen for TV). But there aren’t many of us who will have Wagner’s experience.

On the other end of that spectrum there are the fans who read these comics from an early age and dream of a day when we see our favorite characters in the movies. When that day comes it’s hard to live up to all the expectations. More often than not there’s so much nerd rage over all the disappointments. Maybe we’re just spoiled and should lower our expectations. Or at least come to the realization that comics and film are two different things completely. Each can be enjoyed in their own respect.

On the other side of the coin we now come to films being adapted for comics. Like video games this is not always successful. There are always exceptions. But there are letdowns as well.

I am a fan of the Army of Darkness and ReAnimator film franchises, one more than the other. I did not like the new EVIL DEAD movie but I am eager to see where they will take the series, considering Bruce Campbell has recently hinted at an Army of Darkness 2 in consideration. But we’re talking about comics now.

For the most part I have enjoyed the Ash and Army of Darkness comics. I haven’t seen much of the ReAnimator comics, but what I have seen does appeal to the fan inside. And that’s what these comics are all about.

As a fan it doesn’t take much to interest me. I’m such a huge fan of the "Friday the 13th" series that I will watch any of those movies and read any of those comics and always be entertained. Jason can do no wrong in my book. But sometimes a publisher commits a sin.

Army of Darkness: ReAnimator is such a grab for cash that it comes off clumsy and burdensome. Maybe Dynamite is just testing the waters. That is, if I’m giving them the benefit of the doubt. Maybe they want to know if there is enough reader interest to warrant a continued (albeit limited) series. That’s hard to imagine, considering how they chose to end this current book.

I’m not going to criticize the creative team in any way. As always Dynamite has hired some truly talented people. Randy Valiente’s art creates the perfect ambiance and Mike Cossin’s colors enhance the aesthetics. Patrick Brosseau’s lettering should be admired. The style is reminiscent enough of what we see in the mainstream but he manages to put enough of his own signature into the work that it stands apart. I would have liked to have seen more from Dietrich Smith (maybe an interior pinup) but his cover art does the trick of convincing you to pick up the book and plop down the $4.99 cover price. Not even Mark Rahner’s script can be blamed. If he’s not a fan of these two franchises, he’s done enough research to make it convincing.

No. The fault lines solely with the publisher. This is fan fiction, published for the fans, hoping they’re naïve enough to spend $5 on a mediocre story at best. But I’ve been guilty of that, so who am I to complain?

Ash is hurled through the vortex (once again) into the world of Herbert West (in 1922 this time), where he is soon parted from the Necronomicon Ex Mortis – his only way home. The good doctor quickly gives Ash a shovel to the head and two weeks later our reluctant hero awakens to find he’s been given a new hand. Oh! And he’s also the unwilling minion of the ReAnimator until he can find that evil book West has hidden from him.

Of course there are things that work in Rahner’s script. He has taken elements from both franchises and given fans enough to chew on. He’s even given us a small glimpse into 1922 life. But the choice of the publisher to give us only an introduction as opposed to a full true one shot (and complete) story only leaves us unsatisfied. Usually you would read the last page and see the formula is naturally giving us a sequel setup, but in this case at only 48 pages (and 9 of those pages are a reprint of ReAnimator #0 from 2005!), it leaves you wanting in a very negative way.

Imagine you just ate your mother’s pot roast. You love your mother so you don’t have the heart to tell her it’s not very good. So you eat enough to convince her you like it. But at the end of the meal you’re still hungry and not very likely to ask her for seconds.

This is a real shame. I wanted to like what mom cooked. But I recommend skipping dinner and going straight to bed.