‘A Quiet Disaster’ by Alex Potts 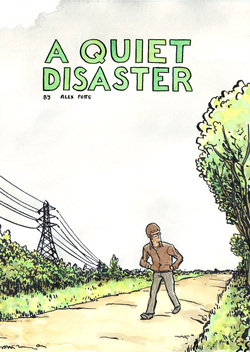 Philip was getting old. His face was getting wrinkled, his hairline was moving backwards and he was on the waiting list for a knee operation. It was his day off and he didn’t have any plans, so he ate his breakfast in front of the computer screen and asked himself “What do I want to do?”.

A grand existential crisis, a surreal Bulgakovian satire, or simply A Quiet Disaster? We follow Philip on his day off work as he struggles to find meaning and happiness through the everyday decisions that make up a day. Why did he cross that street? Does he keep walking, or shelter from the rain? What will make him happy? And just why is that dog wearing glasses?

‘A Quiet Disaster’ by Alex Potts will be on pre-sale from the Avery Hill table at Comica Comiket at the British Library on Saturday 16th August and then on general sale direct from Avery Hill and all good comic shops from the 18th.

Alex has been working in the animation business in London since the year 2000. He does traditional 2D animation, Flash, storyboards and illustration. He has collected some of his comic strips in self-published titles ‘Hand’, ‘Me, Talking to Myself About Myself, As Usual’ and ‘Lost Shoe Comics 1-4’. He is also a frequent contributor to The Comix Reader, including being the artist of the cover to Issue #5.

A Q&A with Alex

You often put yourself in your work, is it generally autobiographical or do you explore fictional situations through your persona?

When I first started making comics all of my work was fictional but I found it difficult to write anything that I thought was good. This situation lasted for about 12 years. Then I changed my approach and I made some comic strips that were almost entirely autobiographical. Since then I've found it interesting to use a mixture of real life events that have happened to me, and of things that I've made up. I like it that not many people know which bits happened and which didn't. Some people seem to think that it's entirely autobiographical but that's not true at all. The best fiction is autobiographical to some degree, and the reverse is also true. At the minute I really enjoy the idea that even something that is completely made-up has a certain truth to it

What themes do you explore in this book and do these relate to any of your other work?

On the surface the theme is of a man walking around thinking about stuff. He's struggling with what to do on his day off work, and struggling to make decisions in general. To be honest I don't really know what it's about, but it must be about something. There are no guns or explosions and no one gets killed.

How are you drawing it? What colour scheme, tools, etc?

That question is much easier to answer! I am drawing it in ink with a dip pen and with brushes, and then painting it with watercolour. The colour scheme is like real life but a bit more yellow.

In terms of complexity/ambition, how does this project rank with what you've done before?

This is the most complex and ambitious comic I have ever attempted, and it's not even 30 pages long! In recent times the longest comic strip I've attempted was six pages, and I am discovering how much work is involved in longer narratives. I like it though, and afterwards I want to do something much longer.
comments powered by Disqus
Powered by