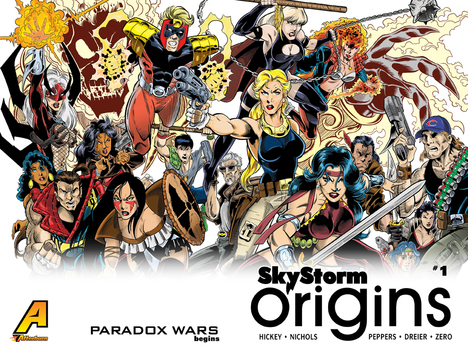 SkyStorm Origins spans the width and breadth of the SkyStorm universe as a massive quest for shards of the TimeStone ramps up toward the Paradox Wars.

Stories of StormQuest, Hellgirl, the Darkness Chronicles, Tempered Steele and others all tie into this epic journey!

SkyStorm Origins #1 has Merlin on the run in medieval times with Marta hot on his heels. He has something that she wants and is welling to do whatever it takes to take it from him. StormQuest appears to stop her from achieving her goals. Emotions run high when they find Merlin after events from the StormQuest Graphic Novel #1. 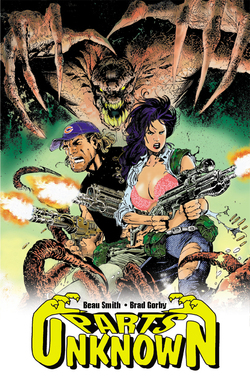 Scalons. Ruthless reptile-like beings that are well versed in the ways of rape, pillage and plunder. When the atmosphere of their home planet went bad and killed the females of their race they knew the males had to branch out and do so quickly before they too were claimed by the toxic air of the planet Scalon.

The planet Earth became their new home. But like any new home it had to be furnished to satisfy their own twisted needs. That meant spreading their evil seed with Earth women to produce a new hybrid race so that they could officially claim Earth as their own.

To do this it meant that Earth women would be captured and taken against their will. Anyone that got in their way would die.

Two members of an elite Chicago crime unit are going to try and make sure this doesn’t happen. Those two are Pendelton Spurr and Maria Lucci. Two recovering alcoholic super cops that could fall off the wagon and under the wheel at any time.

They are the only two things standing between Earth as we know it and a whole new world order. It’s time to stand up for the good guys.

With over 25+ years of manufacturing and publishing history, Robert W. Hickey, along with his brother Mike and co-creator Bill Nichols, has started AFTERBURN, a publishing arm that offers comics books, graphic novels and special items to stores in print and digital formats.

Robert is the co-founder of Blue Line Art, the original manufacturer of professional comic book art boards. Blue Line has supplied thousands of artists over the years with quality art boards and supplies. Blue Line was the first to package and offer art boards to retail outlets with over 40 different products that support comic creators.

Creating Sketch Magazine Robert along with Bill Nichols as the current senior editor, offering comic creators their own magazine to learn and share tips and creative techniques of the industry.

The founding force for his SkyStorm Studio where Robert has created comics for over 25 years. Within that time he has created top-selling comic for distribution into mainstream outlets such as Wal-Mart, Toys R Us and comic shops around the world.