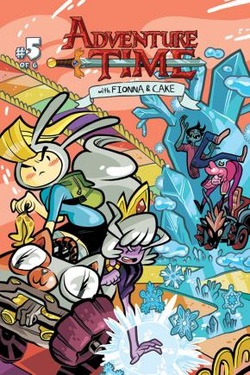 Summary: It’s the penultimate chapter in the saga of Fionna & Cake; all roads have led to this as our faithful heroines and the Fire Elemental face off against the dreaded Ice Queen to save the fire lions from their capture. Will they prevail?

Review: This is the issue I have been waiting for. Fionna & Cake finally take the fight to the cold-hearted Ice Queen and this time they take the Fire Elemental with them who now, thanks to Prince Bubblegum, can be of actual use. The story doesn’t really carry anything over from much of the previous issues which is actually for the better, as some of the previous didn’t really do anything for the story, but we do find out the limits of the fire elementals abilities in his new state and how that may come of help. The Ice Queen proves to be much more resourceful and fierce than before, and this ruthless side of her I really like. She’s a lot smarter and meaner than the Ice King from the main universe.

Also on a side note, I really like seeing Fionna with her hair out, it makes her look so much more epic in battle. So… if you’ve read this issue, the final page has me weeping in that regard. This issue sets up the final battle with the Ice Queen nicely, and I have no problems now wondering how they’re going to end this story, and I have faith next issue will be much better than the series has been as of late. I still wonder if this warranted a 6-issue mini-series, and honestly I don’t think it did, at least in how it was executed but there isn’t much we can do about that now.

The back story was quite humorous; I found the nose horses to be pretty creative and funny looking. That Fionna continues to not want to bathe is a very boyish trait that fits her well and everyone’s disgust towards it is really funny. I’m looking forward to the final issue, after a lull in the recent issues we’re finally getting to the really good stuff.
Final Score: 3 Sinorses out of 5
comments powered by Disqus
Powered by