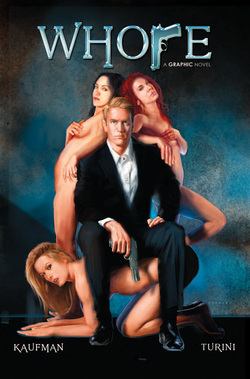 Summary: Jacob Mars is a man who will do anything for money.

Review: Oh yes, I kid you not with the fact that this book really is called Whore. But don’t let that fact keep you from picking this up as it turned out to be a really enjoyable read. Even if I did feel a little incredulous at some of the moments this book had to offer.  Such as during the time Jacob has to get the daughter of an enemy pregnant. I get why he wants Jacob to do that but still find it pretty twisted. You know it’s a bad thing when even Assassins are getting down sized cause of the terrible economy. And that’s exactly the situation one Jacob Mars has unfortunately found himself in. Although that would answer the question of where at least some of the money America is using is going off too. Darn assassins! Quit being so good at your jobs and give America’s cash a break! The art, the colors, and the writing are all pretty great through out the story. You can tell Jeffrey had a lot of fun writing this, heck even his foreward at the beginning is fairly amusing. While some might find it demeaning for a guy to be using women as a throne of sorts, it is still a fairly neat cover. Especially with how the ‘r’ is done up. I love how ‘The Man’ gets involved in this whole thing, and gives Jacob a fairly straight forward answer regarding our far away troops. Makes a weird twisted sense of truth. Heck you may even be a bit surprised by who 'The Man' is!

Liable to give those that are conspiracy theorists something to talk about after reading this! The title for the book honestly had me thinking there was going to be a severe amount of nudity. And while its there to an extent, its not as much as I thought it would be. Some might liken this to some random soft core porn film but with better writing. Now while I did feel there was a bit too much sex, you got to admit though that Jacob is one lucky guy! Something that would probably make James Bond feel envious of. I kind of wouldn’t be surprised if Jacob has another kid out there aside from the one he has to help bring into the world. Even though Jacob basically gets downsized by his own country, he still manages to get some good green going for himself. Helps that he makes bank with every enemy of the country he kills. I think one of the weirdest jobs for an assassin to do is being part of a dog talent show. I mean that’s just got to be the lowest thing one can do. Especially when he or she is used to more interesting things. Although using some Viagra to help try and win the show is an interesting tactic. Pity the girl the dog went after though! I have to wonder if Jacob would be able to have a normal life or if it would quickly bore him? Especially when doing a regular job wouldn’t bring in all that money he’s used too! There’s a moment with the Tyler character that might leave you uncomfortable. Makes you wonder if that was the writer’s intent or was just purely unintentional. The ending is something I was honestly not expecting. But it makes me wonder why there was a lot of secrecy? Guess we’ll never know, darn ABC agencies and their need to keep folks in the dark! This is something you will definitely want to check out, but keep away from young eyes. As there is quite a bit of content they honestly don’t need to see just yet. You’ll also probably find yourself wondering if Jeffrey’s Tyler character is his amusing version to a certain person in real life.
3 out of 5 Stars