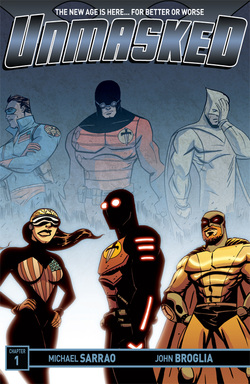 Summary: Unmasked is about a young journalist who has discovered a conspiracy involving new, violent versions of her world's now deceased, classic superheroes.  She wants to unmask the New Age Heroes, since they are acting just as ruthless as the supervillains they are trying to defeat.

Review: Boy talk about a world really down on its luck! No superheroes cause of some guy who’s now an old guy and probably a big lack of common sense in this world much like ours! Only of course we just probably share the lack of common sense thing. But anyways, I’m not here to talk about common sense. No I’m here to talk about this sweet little comic instead. Cause hey, that’s just way more fun. Right? Right. Michael Sarrao has come up with a fairly good story, and one I hope to see more of. His main character Paige Cruise and her Protégé honestly reminded me of Lois Lane and Jimmy Olsen. Mostly cause of her determination and how Protégé just seems to remind me of the Christopher Reeve’s version of Jimmy. I love the neat little introduction of heroes as the story starts to unfold. And the neat idea of how each decade had its own brand of super heroes to it. This is an idea I would totally love to see more of in stories. Especially how in the way it would develop Legacy characters and potential issues they might have to deal with from their predecessor’s past. John Broglia’s art is great through out the whole book, even if there is a bit of a goriness at one point. 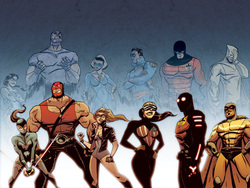 Guiseppe Pica’s colors go very well with the story as well. And I hope these two stay with Unmasked for however long it goes. The cover for Unmasked also reflects the differences between the older and the newer heroes perfectly. And you know its a sad moment when our main girl has to watch as her father’s work is shut down. Eric Zeist is another character I think folks will find themselves liking. While he seems fairly old, he’s also got a bit of a jokester in him. Which is something I like. And while the new age heroes seem to be a bit hardcore, it does seem like at least one isn’t willing to go to lengths to ensure justice is done. The big fight scene and reveal are pretty sweet, although I find the cliff hanger fairly annoying. I am very eager to see what happens next in Michael Sarrao’s tale of some fairly unhinged heroes. This is something you will want to add to your collection, and share with others so that they too can enjoy the experience of Unmasked. As this first issue was done up very nicely. You can also go to the Unmasked Kickstarter page and help donate, as with your help. Unmasked will be a project that succeeds in the long run.


To check out the Kickstarter project, click here: http://www.kickstarter.com/projects/michaelsarrao/unmasked-the-new-age-heroes-volume-1?ref=live
comments powered by Disqus
Powered by