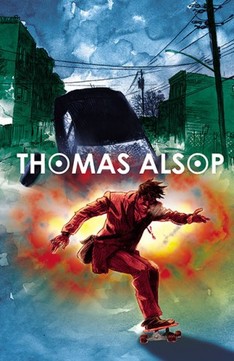 Summary: Thomas’ plan to free 3,000 souls has made him a pariah in New York City, but now it is the moment of truth in this final issue! To succeed, Thomas must face more than just demons in the past. Dark, personal secrets shall come to light…

This was a near perfect story from start to finish. Thomas goes through this gut-wrenching experience and Chris & Palle allowed us to come along for the ride. His metamorphosis from issue one to issue eight is as powerful and unexpected as it can get. What we witness in this series is a once in a lifetime event as the introduction of a new and powerful world that will be around for some time to come.

Along the way we met the hand of the Island and learned it’s history, the significance it plays in society for example. That sort of thing and how it has shaped the history of the Island of Manhattan. Besides New York City has always been a magical place and we’ve seen one reason for that here, not to mention what role the hand plays in keeping the city safe and still magical.

It seems that the entire series leads up to the 9/11 attacks and those poor souls still trapped where the buildings were who needed to be released and sent on their way. To free them and to come full circle in the story meant that Thomas himself had to be freed as well because he was in denial about Susie. This whole dilemma was really something that needed to happen so he could once again safely resume his role as hand of the Island.

Chris and Palle have given us some incredible characters to work alongside Thomas as well and have fleshed out his life and those of his companions beautifully. Opening with what we were to assume was Thomas coming to perform the exorcism of the century was pretty awesome. The look he was giving us with that jacket was kind of Great Balls of Fire meets The Beatles. I loved that whole retro 60’s kind of stuff, the whole Summer of Love or whatever that it was being strived for. Because it was unexpected and fun!

The way this whole day plays out with various Alsop artifacts, which I hope we see more of in the future just so ya know, and him doing his work and seeing the toll such magic takes on him, well let’s just say I’m a fan for life now. Also the mixed reaction of the crowd around them was nicely done. It just goes to show how many religious crazies there are out there that cannot accept magic as something real, hmm sounds familiar. Religious zealots possibly?. Still I think the real ending of the book was the most realistic and tragic ending that I would never have seen coming and it rocks you as a reader to the core. It’s just so impactive and suddenly you realize why every element of this story has been told the way it has. Chris’ construction of this story is superbly brilliant and has marked him as a rising star in the industry. And I now expect this kind of stuff from him in the future, so mister I hope you’re ready.

Palle’s artwork is at times haunting, at times brilliant, at times psychedelic, and all of it blends into one another with such ease and grace as it all helps the flow of the story.  This is a rare team that should work together as often as possible.
comments powered by Disqus
Powered by