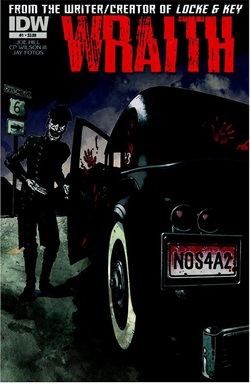 The Wraith: Welcome to Christmasland #1
IDW
5 out of 5 stars
Created and written by: Joe Hill
Art by: Charles Paul Wilson III
Colors by: Jay Fotos
Letters by: Shawn Lee and Robbie Robbins
Edits by: Chris Ryall
Review by: David Paul

Summary: Joe Hill's New York Times Bestselling novel, NOS4A2, introduced readers to the terrifying funhouse world of Christmasland, and the mad man who rules there: Charlie Talent Manx III. Now, in an original new comic miniseries, Hill throws wide the candy cane gates to tell a standalone story that is at once both accessible to new readers, and sure to delight fans of the book.

Review: I’m just going to get to the point right away. Wraith has the potential to be the best horror comic in years. Of all properties being developed for movies and television Wraith should be optioned now. If I’m correct in my opinion, and if it were crafted by the right filmmaker (someone with passion and not hindered by an overbearing studio), it will make one of the creepiest horror films of all time.

But this is a review about a comic book and I am obligated to do my job.

The art by Wilson will remind you of the many Dark Horse publications back in the 90s. I can’t be sure who his influences were but his work is very retro Dark Horse, complimented by the colors of Jay Fotos. I’m not sure whose idea it was to make the pages appear as if they are aged but it’s a fantastic effect that adds to the eerie ambiance. Heightening that effect is the work of letterers Shawn Lee and Robbie Robbins. Altogether this creative team transports you into the surreal realm of horror from the very first page. I’m so convinced that I’m not sure this isn’t a reprint from the 90s.

Hill has created a real monster for the new millennium in the character of Charlie Manx. There are very few stories about monsters these days that compel you to accept them as scary. They’re all trying very hard: “Blah. I’m a scary monster man!” Joss Whedon made a good point about this in his movie 'Cabin in the Woods'. Horror only changes when we change. The old monsters that used to scare us no longer scare us. They’ve become fodder for parody.

It’s going to take a lot to scare us now. We’re very jaded. Real things scare us: natural disasters, patriotic YouTubers, men in skinny jeans. But with fiction it’s a much harder sell. Maybe because the real things that scare us are far worse than anything fiction has to offer.

Hill has given us something new and for the reasons stated above this should be celebrated. Charlie Manx is a character you can easily imagine is a real person. Oh, he’s grim and grotesque, as every fiend should be. But he’s a monster who has the ability to convince children he’s a man; a man they can trust; a man they can love.

In this first issue we’re introduced to the fiend with a horrible complexion of a grey rat. He’s attired very officially as a classic car driver for those who preferred a posh lifestyle of luxury back in the 30s, driving a regal Rolls Royce known as a Wraith. As he escorts a crying little girl to Christmasland he regales her with a story about his own childhood, promising her that by the time they reach Christmasland she’ll be so happy and grinning so big he’ll be able to count every tooth in her head.

Now let’s be clear. I’m obviously not going to give everything away. This is an origin story and I’m not always taken by origin stories. This one foreshadows a lot to come and the first issue has done the job of convincing me to give the series a chance. While on the surface it appears like something run of the mill the same could be said of The Walking Dead. Personally I never gave TWD a chance before it was adapted for TV because I do not like the Zombie genre. Now it’s one of my favorites and I think of all that I missed before I gave it a chance.

Horror should be just that: horrifying. What sold me on this book was a scene that turned my stomach and made me want to close it. After you’ve read it you can debate the ethics for yourself.

I want to reserve my final judgment until after I’ve read this first story arc (if it’s going to be an ongoing series). Until then I can’t wait for the second issue. More Charlie Manx please!