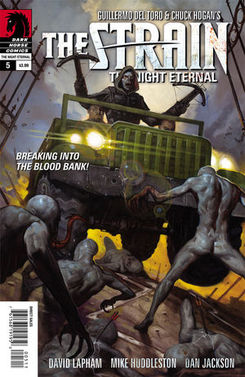 Summary: A game-changing rescue mission is underway as our heroes storm the veritable slaughterhouse Camp Liberty, in search of Dr. Nora Martinez!

Review: Two years ago the Master won. He spread the vampire virus across New York and by triggering a series of nuclear meltdowns, defeated the ancient vampires that opposed him. Now in a world where the Sun is all but blocked out by nuclear winter, the Master’s influence reaches across the globe.

I found that the way this book opened was highly intriguing with the space station in orbit being coerced down by sweet words to a woman suffering from being alone and having dementia. It’s pretty weird and who exactly wants the station home and for what reason could only be guessed at. I really am a fan of how David is interpreting this story for this format and how he is able to weave it all together in bits and pieces to have it all make sense as the story progressess.

Nora and her mother are in a camp much akin to what the Nazi’s did to the Jews with shaved heads and all, though here they are in cells are used as cattle. They are a food source that needs some taking care of. It’s sad to see her mother crumbling away before our eyes but that’s what happens to the elderly, still it’s an element to this story that grounds it in reality surrounded by the fantastic scenario they find themselves in.

I like that Eph and his crew continue to fight on here, going to the camp to free those there giving us all hope that there is a light at the end of the tunnel. I still love that the Master has this kind of soft spot for Dr. Goodweather, and admist the fighting they all stop for a chat with him. It’s the kind of thing that stops you for a moment and you find yourself captured in the moment with them in some mesmerizing way.

I know this is taken from source material but David manages to take the right bits and pieces to get under the readers skin, giving them all the information they need to know exactly what’s happening. So while Vasily is inside and finds Nora, Eph and Bruno are outside and while it seems that Bruno’s been infected the result of the opening sequence comes into play and the result gives the reader hope that while all seems lost it really isn’t. And that somehow one way or another, Eph and his crew can fight back the Master and free the world from his grip.

Mike’s interiors capture some of the horror of these vampires and the world they live in, and while at times I wish it were more intense and frightening it does the job rather well. I mean is it too much to ask that the interiors look as fearsome as the cover? But again, hey that’s just my humble opinion because here is one of those rare cases that regardless of the interiors this is a story driven book and that is what keeps us coming back.

A strong powerful story of a different breed of vampire and the struggle for human survival against all odds. It’s a story that is being expertly told.
comments powered by Disqus
Powered by