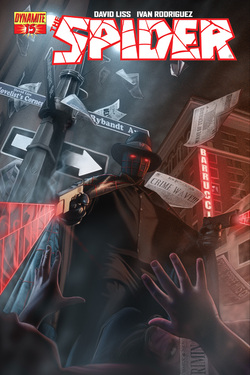 The Spider #15
(3 out of 5 stars)
Dynamite
Written by: David Liss
Art by: Ivan Rodriguez
Colors by: Vinicius Andrade
Letters by: Simon Bowland
Cover by: Colton Worley
The Spider created by: Harry Steeger
Reviewed by: David Paul

Summary: Richard Wentworth has been brought low, but the Spider must still protect New York! As a terrible new wave of violence sweeps across the city, the Spider faces a terrible new enemy who will stop at nothing as he seeks his twisted revenge. But how far can the Spider go to save an innocent who may be the key to this murderous spree. It's pulp mayhem, Spider style!

Review: Dynamite books are always beautiful. The illustrations are sometimes photo-realistic and give the impression they were hand painted, with a style undeniably their own.

From page one of THE SPIDER #15 the art of Ivan Rodriguez and Vinicius Andrade jumps out at you, testifying to the mastery of their skills. In panel one we can see they certainly know how light works. From the shimmery reflections in the streets to the contrasting shadows above this is the kind of attention to detail we are getting. It’s absolutely beautiful.

Characters too are given equal attention. Far too often in comics an artist will develop a style in which he pigeonholes himself into a single facial pattern, over which he will throw a different hairstyle in the hopes the characters look different enough. Here characters are given different face and head shapes (even different body types!), giving the notion they were modeled after real people. I wouldn’t doubt if that were true.

Sets and background locations are designed in a way to make the eye believe they are real, at least real in the world of The Spider.

The action, at times ultra-violent, is rendered in individual panels as if you paused a movie on your 1080i HD TV just to take in everything you’re seeing at your own pace to better appreciate it.

Yes. Rodriguez and Andrade have done everything they can to make you buy this book at its $3.99 cover price. It’s the kind of quality you’ve come to expect from Dynamite. But how does the story hold up – is it worth it?

Following the fallout of a previous story arc in the ongoing series Richard Wentworth (The Spider) finds himself a fugitive. His nemesis The Fly took control of his company and his life. He can’t turn to his friends for fear of their being ambushed by the FBI, and he’s broke. Fortunately he planned for such an event:

“The fortune my father built by selling weapons and causing misery – that all belongs to The Fly now. I had enough squirreled away to get restarted, and I had a back-up identity ready to go. But let’s be honest. This pretty much sucks.”

In this issue writer David Liss is setting up a new story arc in which The Spider is looking for a really bad guy who goes by the name The Red Hand, who talks an awful lot like Forrest Gump. It’s all sorts of murderous fun.

THE SPIDER is one of those revival characters from an age long since passed that Dynamite has been publishing to remind us all, “Hey. These guys used to be comics too.” I have only ever been vaguely aware of this character, unlike The Spirit from the same era. You can brand me a heretic but I like the original Eisner SPIRIT opposed to Frank Miller’s re-imagined version. And let’s not even talk about that terrible movie. Point is I do have some knowledge of some of these characters from that age gone by. The Spider is not one of them, so I liked the experience of getting to know him. But I gotta say, I don’t like this guy. At all.

Having my own life interrupted and taken control of might send me over the edge as well. But what this guy does is not only not cool, it’s just plain stupid. Namely he gets drunk and goes on a killing spree. Granted, these people he kills are very bad people but if he wants attention from the wrong people he’s got it.

There are a lot of comparisons one could make to The Spider and others, each from the same era when Harry Steeger created him. Batman and The Shadow come to mind. Of all the characters from that era, only Batman has been so enduring.

While it is true that Batman used guns, much the same way all these characters used guns back then, only Batman evolved. Did it make sense that a guy who witnessed his parents murdered by gun violence would employ their use? Sure, it can be argued that Batman lost his guns when the publishers sought to make him kid-friendly and introduced Robin. Someone more versed in the history of Batman is better suited for that argument. But it was a change for the better. It forced the character to evolve, while other clones grew stagnate and uninteresting.

So we have a new version of The Spider. Not familiar with Steeger’s original so I can’t tell you if this is an improvement. What I can tell you is this man is not a hero. He is pure vigilante. If that’s what Dynamite is going for they’re successful.

David Liss’ writing is effective. But one of the things I am wondering about Richard’s personal life is why would Nita (the woman who knows almost everything about him) agree to help him knowing that he’s going to use her help to kill people?

The dialogue is clever. Richard does a great job of persuading Nita that she should help him. But she flat out tells him she won’t help him because she knows he is going to kill people “in cold blood”, and then he turns around and tells her, “If that’s what I need to do, then yes.”

Did I forget to mention Nita is a reporter?

Maybe it will make sense later. Ya know? After all the killing in cold blood.