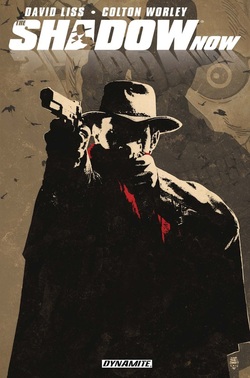 Summary: Having spent decades in the east to rejuvenate himself, the greatest pulp hero of them all, The Shadow, returns to New York in modern times. Lamont Cranston seeks to resume his old life, and his heroic alter-ego is ready to stand once more as an enemy to evil. But while he slept, his foes have remained vigilant, and the most dangerous man that The Shadow has ever faced prepares to rise once more... with his wicked progeny by his side! It's the shocking beginning to a new era for the Shadow!

Review: One of the biggest challenges any writer faces when contemporising a book is whether the new environment will be as reflective of it's original source material, put simply; “will it work?”

The Shadow is pure Noir. Now while this series lacks that swagger, it's a different kind of atmosphere. It certainly has hints of dinginess, but although it's missing a certain “je ne ce quois” for it to be referred to as 'classic Noir'. It's actually replaced that with a feeling that ultimately parallels it, dare I suggest the term...”Neo-Noir”?

What we have here is a more action-based series, like a kick from the TV series '24'. Which may sound daunting to hardened fans, but we're certainly not denied of a classic plot.

We're introduced to a whole new collection of characters to this series, my personal favourites are unquestionably Margo Forsythe, Grand-Daughter of Margo Lane, Shadow's former lover, and Batu, who I won't elaborate on. But she is one nasty little minx who is most definitely her father's daughter. So who is her father? I'm not telling you that! You'll need to read the book for that answer!

This is a book that doesn't insult the intelligence or maturity of it's readership. Screenwriter David Liss doesn't pander to your sensibilities or apologizes for this new direction for The Shadow, nor should he.

One of the smartest scenes is at the very start, since this series is a continuation of the Shadow mythos, rather than a 're-envisionment', obviously you'll want to know how Liss pulls that off, right? I mean, you need to rationalise how we get this far into the future and what's happened between now and then.

Liss suggests this in just ONE panel. Of course, we get further explanation as the story progresses, but it was a question I needed answering early on. Which is resolved by a brief, casual conversation with two by-standers. It's not an original explanation, but the timing is spot-on.

While the plot itself is nothing we haven't seen before, it's the dialogue and characterisation that drive this. Liss knows his characters well, they're already established in his mind and that's conveyed well throughout. Our heroes feel like heroes, our villains are vicious and smart.

Colton Worley is a remarkable artist, he needs to develop still, as there are some points where the work is artistically inconsistent. For example, facial features on the same characters can vary from panel to panel at times, sometimes the quality of the work is not as sharp in some areas as it is in others. That said, at least 97% of the work is consistent and beautifully detailed, comparable to Adi Granov or Alex Ross.

There's very much a 'Cinematic' feel, which reminded me of the tone of early Ridley Scott films, specifically, “Bladerunner”. Hey, if you're going to go with that feel, it may as well be Scott's best.

Oh yes, and if that still wasn't enough, the cracking covers were provided by none other than Tim Bradstreet.

This is a brave, bold new take on The Shadow. I'm not sure what the future will hold, but I'd gladly read more of Shadow Now. Will we see this? I'd like to think so, but one thing is for certain; The Shadow definitely knows.

8 out of 10 for overall quality

10 out of 10 for bravery and inventiveness 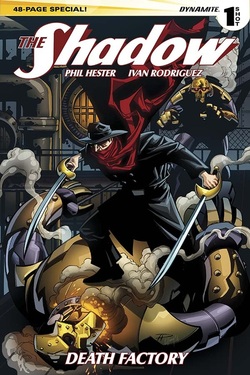 Summary: The weed of crime, which once grew madly in the rich soil of the Great Depression, is now withering on the streets of New York. A new factory has sprung up among the shuttered sweatshops, sweeping the city's most notorious criminals and desperate lowlifes into its employ. When The Shadow's loyal operative Jericho Druke infiltrates the works, he finds it run by a fascist, technocratic madman bent on fomenting the racial tensions that threaten to shatter the United States. The Shadow and his team must destroy this Factory of Death before its lethal product poisons a nation.

Review: You've got to love Phil Hester. This is the man who brought Green Arrow back from the dead. Hester knows how to spin a good yarn, no question about it. But what he really excels at as a writer is taking what might otherwise be considered an 'acceptable' plot and turns it into something special, so this is one Special that really lives up to his name.

Hester's script smacks pure Noir, but without heavily pouring it on. He avoids hitting the wrong side of shmaltzy dialogue, which is often over-done. Instead, we receive conversations that you'd expect in a film of the period, as opposed to reading the tweeness of Saturday morning serials. Hester tackles racial tension in a mature manner, Jericho Druke is a fantastic character. If Phil Hester branched out into a spin-off series for Druke, I'd certainly give it a look.

Particularly interesting is Hester's repeated nods to The Shadow's history, like the pulp novels for example. The mention of Maxwell Grant and around half of Mr. Allard/Cranston's favourite support characters are featured in this special, and all are included constructively and naturally. Even the title for the special is a wink at us.

Ivan Rodriguez deserves credit for hitting just the right note on the art chores, I actually got a vibe of classic Michael William Kaluta, who needs no introduction to long-time Shadow fans. While Rodriguez is clearly heavily influenced by Ivan Reis (Justice League, Green Lantern), and really, when is that a bad thing? Well it might be, if Rodriguez were not able to hold his own so amiably.

Impacto Studios provide some exquisite colours, which deeply enhance not only Rodriguez' artwork, but really adds atmosphere to the book, I'd love to see their take on Gotham some time.

All-in-all, an incredibly enjoyable read, and I, for one, would love to see future team-ups with this creative team. This one gets an 8 out of 10 from me. So go grab a copy, it'll be a fun time for all.
comments powered by Disqus
Powered by