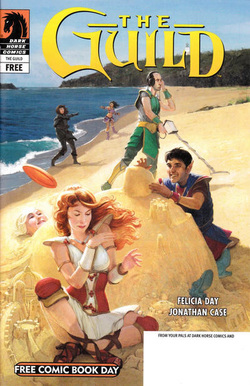 Summary: The Knights of Good find themselves at the beach for their monthly out-of-character guild meeting, antics and hilarity ensues in a simple, fun story.

Review: I waited till the series was over to watch The Guild webseries by Felicia Day, and I’m glad I did as I’ve been marathoning it all week and it’s been a great experience. I can see why Joss Whedon put her in Dr. Horrible’s Sing-Along-Blog, anyways I’ve been in a guild mood obviously and when I was looking through my comics I happened to stumble across this 2012 FCBD issue I completely forgot I had and felt it’d make for a wonderful little review.

The story is written by Day herself and so everything feels familiar and right at home with its parent series, she definitely has the characters voices down by this point and I could only read it in their voices throughout the whole thing. This isn’t a very long comic, but what we’re provided is a fun bonding issue. One thing I love about the webseries is the antics these gamers get into in real life and how their real life selves differ from their game counterparts.

Namely Vork, who stands for strict truth and justice in the game, yet in real life he is the most hilarious petty thief you’ll ever meet. The chemistry between Tink and Bladezz is still ever-present in a fun bit as they try to outdo each other at some beach sports: speaking of which, must remember to try fanoodle surfing someday. Clara is still her irresponsible self, but this time in a more caring kind of way instead of her usual selfish way, which admittedly has continued to turn me off from the character.

Kinda sad we didn’t get to see Felicia drawn in a bikini but she knows herself the best and when faced with extremely fair skin in the sun, that wouldn’t make for a happy combination. She doesn’t get a lot of page time here for being the main character but that’s honestly alright, it makes sense for the more active members who can go out in the sun to get more time to display what they’re up to. And Zaboo is still Zaboo, the weird little Indian who is extremely good at everything he does, such as building extreme replicas of “every castle in the game” they play.

The art is pretty cartoony and captures the innocent fun the series has to it, it make everything seem hyperactive like you just want to be there interacting with these characters. Though Zaboo’s hair here bothers me as it somehow makes him look a little less like his actual real life counterpart, but I digress. This comic is also very vibrant and colorful which makes it more enjoyable when looking at all the details.

As a stand-alone story, this works better if you have seen the series, as this just a fun little story that has no overbearing on plot or continuity. It simply exists to have a bit of fun in a few spans of pages. But the characters come to life more if you’re already familiar with them. If you haven’t seen The Guild then you may not understand much about this comic and so you may not have as much fun with it as I did. That is honestly probably why I enjoyed it like I did, because I was already familiar with whom the stars were. This isn’t a huge problem, but with FCBD being about introducing new people to comics through free comics (something that would entice most people hesitant about paying $4 for something they may not enjoy) it’s still a problem and I’m not sure this would bring in new readers that well if they ever discovered it.
Final Score: 5 Guild members out of 5
comments powered by Disqus
Powered by