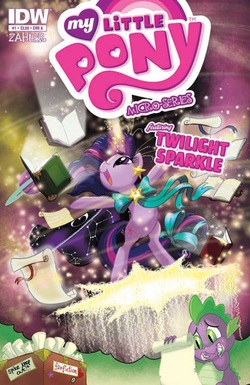 Summary: In this stand-alone adventure, Twilight Sparkle must pass her latest test in friendship by helping out the cranky old royal archivist learn to feel happy again, but not before Twilight uncovers the archivist’s greatest secret…

Review: This was pretty good, I must say. I’ve never really been a huge Twilight fan, but I don’t mind stories centering on her, she is after all the mane pony of the series. MLP is very fluent in taking cliché stories we have seen many times and still making them entertaining, this one seeing the old story of the young hero teach the cranky old mentor how to be happy again.

The jokes are mainly kept to the back ground but also hidden within the incredible amount of references to modern literature and entertainment. There is an insane amount here and it’s really fun to figure out what they are. There is no big evil to this adventure for Twilight to face really, just a cranky old pony that has lost her way. The art in this adventure is very good; it’s quite impressive for this and the writing and the lettering to have been done by the same person.

Both Twilight and the Archivist are endearing as characters, and you really care about them by the end, this doesn’t offer you much insight as to why we should really CARE about Twilight if you haven’t seen the series. But even without that it is still pretty simple to jump into.

There’s not a lot of substance, it’s just a fun little story to pass the time on a day when there’s nothing to do. And I think that is the point of the Micro-Series, to not be caught up in continuity and give each Pony a spotlight to shine so that we can get to know them a little better. Which if these comics are your first foray into the MLP world, then that is definitely something that is needed.
Final Score: 4 Swing Songs out of 5 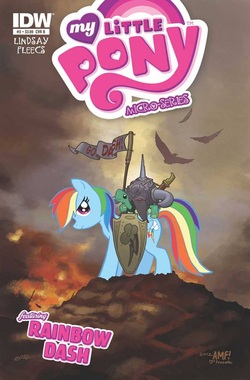 Summary: This time, as the spotlight series continues, Rainbow Dash must face a sadness eating cloud that has begun to loom over Ponyville. No one has succeeded in stopping it and only Rainbow Dash can face up to the challenge, entering her domain as a Pegasus Pony, can she save all of Equestria from eternal sadness?

Review: This one was pretty stinkin’ fun as well; Rainbow Dash is my favorite Pony so it was fun to see her get to strut her stuff. Being the brashest of all the ponies, Rainbow loves to show off and this time gets her into a lot of trouble as her showing off brings doom and gloom to Equestria. It was nice to see her take responsibility for herself and take the villain head on.

The sadness eating cloud is a great concept, boosted by the secret behind its power, I love seeing other creatures existing in this world not just simply Ponies of three different kinds. It makes the world feel larger and also shows us that there is so little of this world we have yet to explore which is exciting.

Apple Jack plays a supporting role in this and the story does a good job of showing off their unique friendship, which I feel as if these two have the strongest buddy cop friendship of the whole bunch. I also love seeing Rainbow’s worry for her pet turtle Tank, which if anyone remembers Tank’s introduction to the series seeing the little guy grow on her is quite heartwarming.

One thing I wasn’t too fond of is the logic behind the cloud being there for weeks and having at least a few unicorns with magic in Ponyville, I didn’t really buy that none of them tried anything to stop it, especially Twilight Sparkle. This was Rainbow Dash’s story so sometimes the logic of a matter such as this has to be thrown out the window to let the main star shine.

The art is wonderful as always, and fits within the design of the series. The uses of the sonic rainboom in this comic are incredible to look at and most definitely my favorite portions of the entire book. And I like the inclusion of rainbow apples, looks like someone has been playing the iPhone/Android MLP game app.
Final Score: 3.5 Sonic Rainbooms out of 5
comments powered by Disqus
Powered by