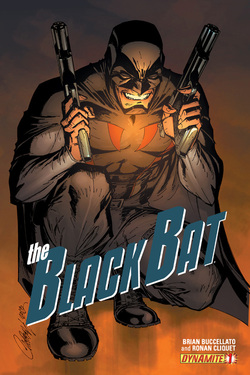 Summary: A classic pulp from the 30's returns in this modern take on a seminal character that inspired several well-known comic icons. Tony Quinn is a brash Defense Attorney to the mob who compromises his ethics for financial gain. When he refuses to cross the line and commit murder, he is tortured and blinded by his gangster employers. But when a fortuitous meeting with a covert agency gives him a chance to make amends, Tony transforms into the Black Bat and embarks on a redemptive quest to right the wrongs of his past.

Review: Now I'll be the first to admit that until recently I had never heard of The Black Bat. And the fact that Dynamite has decided to bring back this years old character from the 30's is just great. And in a way, he's what helps lead to the creation of Batman or parts of the character at least. So he's kinda like his father. Which kind of leads me into thinking he's the same for Daredevil. Mostly cause of the eye condition. Now after a bit of research there was a bit of legal issues way back in the late 30's but luckily things managed to get resolved. And thank you Wikipedia for helping me learn that. Now when you see what I am assuming is cover A, you might think this guy is just up to no good. What with the toothy smile, the guns, and such. Luckily not the case with Black Bat. I honestly wouldn't mind trying to track down some of the older material and reading all of that just to get myself more familiar with this character.

I rather like how Lopes seems to only use a certain amount of colors for this book. Which I think goes really well together and probably helps keep the Pulp vibe going. And I've got no complaints about Cliquet's artwork. And if both are staying for the long haul on this book, that's going to be really great. One of the nice things about this comic is that it doesn't shy away from violence. Although if you're squeamish at the thought of bad injuries to eyeballs, you just might want to shy away from this. I wonder though just how bad things could get between Quinn and Brody as this book goes on. I could easily see Brody letting harm come to Quinn due to how he feels for the man. Although that line of thought may just wind up being completely wrong. Quinn having Silk hype the fight like he did was rather smart. Kind of reminds me of Any Which Way But Lose a bit with that too. I think for me though the best part of this whole book was Quinn's fight with the Brute.

Not to mention the moment during the fight that had me dropping my jaw in surprise. And that's a rare thing to happen for me while reading a comic. You wouldn't ever think a hero would go that far to get a win, but as he mentioned he doesn't see himself as one. And while The Black Bat didn't exactly loose a set of parents to Crime, he still has reasons for donning the role. As I mentioned with the Daredevil thing earlier, where as Matt Murdock only defends the innocent. Quinn is like his exact opposite. So its a fairly neat parallel. I'm rather curious too on the hot blonde and the doctor guy and look forward to seeing more of them. And if what they have in store for Quinn is either a good thing or not. Hope he won't need a Number 2 Pencil! So if you decided to pass this book up for whatever odd reason, what's the matter with you!? Go back to your comic shop and pick this nice read up! And if you did pick this up, good on you! Certainly shouldn't be a book to miss out on!
5 out of 5 Stars
comments powered by Disqus
Powered by