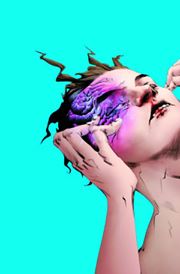 Review: Peter has always been a solid writer (loved his Hellblazer) but honestly it was Piotr’s work on this that attracted me to the project. His work lately has enthralled and captivated me with his unique style. With his attention to detail and his ability to draw facial expressions and emotions constantly amazes me. He fits with Peter so darn well since both have this ability to really get to the heart of the characters. They complement each other so very well and I hope they will continue to collaborate on many projects or just on this book for a good time to come.

Well the opening is a bit ambiguous, but hey it works in drawing you in to see what exactly leads up to this moment or better yet what that moment means for our main character Dr. Rory Fletcher. His story starts off on a really bad note, he’s a Junior Doctor at London’s King Street Hospital and he’s had a CAT scan revealing a brain tumor that is growing at an accelerated pace. His colleague is a man of science who seems to be utterly fascinated by his condition and is somewhat offensive to the human element of it all. Still this sets the stage for Rory and where he goes from here.

His best mate Raz is the first person he tells and things begin to spiral out of control from there. With Raz’s big mouth and the sudden come on of Emma, another Doctor he works with, seems to be driving him crazy. He has to come to terms with what’s happening to him, make the proper arrangements, and all that jazz. But his life is going to take a decidedly different turn of events thanks to Raz. I kind of like Raz, he’s a take charge kind of guy and seems to really care about his friend and does what Rory can’t and that’s think of ways to combat this. This is incredibly nice characterization work from Peter and he gets you to like, understand, and care about what’s happening very quickly ensuring the reader will want to come back to read more.

Professor Matthew Quigley was doing research and now it’s called Treatment Q, “sounds like something out of Dr. Who” indeed and quite possibly what we saw on page one! Raz has acquired this treatment and as unethically as it seems the two embark on a series of trials on Rory with it. It’s here that the shit really hits the fan as things spiral out of control for Rory and the effects of the treatment can be fully seen. Suddenly Peter gives us this medical drama thriller story with super-powers that has intrigue and personality. Warping his mind and his actions, he’s caught up in all this with no way to learn to control what’s happening to him. This is brilliant stuff and as we learn that Raza is using Rory as a guinea pig to make a name for himself the situation goes from bad to worse. The writing really is incredible because you don’t see what’s coming, here you think Raz has his best interest at heart but doesn’t and that in itself was a great twist. Along the entire journey of taking the experimental treatment Rory's fleshed out as a person and while things get a bit crazy it's definitely something that can be seen happening.

Now can Rory survive going from being a guinea pig of Raz’s to that of some shadowy government agency without losing his mind is the real question. I’m totally going on assumption on the shadowy agency thing but it looks like it fits from where I’m sitting.

Dynamite already mastered the re-introduction of classic characters and now they are unleashing creators with their own unique visions and damn they’ve got their finger on the pulse of what’s hot! Welcome to the next generation of creator driven projects and the force they are bringing to the stands.
comments powered by Disqus
Powered by