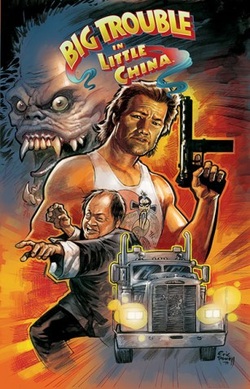 Make it or Break it
Special Edition
featuring,
Big Trouble in Little China

The Continuing Adventures of Jack Burton and the Pork Chop Express: The Hell of the Midnight Road & the Ghosts of Storms Part 1

By: John Carpenter, Eric Powell & Brian Churilla
Published by: BOOM! Studios
Verdict: Oh, how I wish this could’ve been!

I’ve read this comic book three times now and I have been struggling with how to write this special edition of “Make it or Break it”. There’s just no easy way to summarize how I’m feeling about it, other than to emphasize there are very few comics that I would dedicate a special edition to.

By now you’ve probably already read the numerous reviews on other sites. Seems this is a title worthy of the accolades, so I’ll just confirm that for you. As a comic book it rocks. The only thing that makes me sad is the thought of how friggin’ awesome this project could’ve been as a movie in the late 80s. That thought in turn makes me think of why John Carpenter never gave us a sequel.

John Carpenter of the 80s was a filmmaking genius. Even his lesser known films, such as Prince of Darkness, had an impact that influenced a generation of filmmakers that would follow. He was never comfortable with staying inside the box. He often bent his genres. In this regard he was ahead of his time. Today there are many filmmakers who bend genres, giving us cowboys, Vikings and aliens; monsters and romance; superheroes and comedy; Kanye West and Kim Kardashian.

Let’s go back to what could’ve been: When Carpenter gave us Halloween he really gave us something special. I have often imagined his vision for the franchise was very different from what it became. We can see glimpses of that in his underrated Halloween III: Season of the Witch. I think it’s possible he was attempting to create a sort of playground of his own. He very well could’ve given us an anthology of Halloween films, all featuring self-contained stories, few (or none at all) having anything to do with each other. Who knows!

In the years that followed Carpenter offered us a handful of sequels. Well, maybe not even a handful. Is it possible the reason we never did get a sequel to Big Trouble in Little China had something to do with his Halloween franchise experience?

There are all sorts of questions that only the filmmaker himself can answer, so I can’t be too concerned with that. What I am concerned with is the script for this comic book. I have to wonder how much of this story is Powell and how much is Carpenter. There’s too much that seems like the voice of Jack Burton. Then again, this could be the clever writing of Powell.

Whatever the case, the end result is a perfect picture projected into the theater of the mind. You can see yourself watching these two movies as a double feature, the first flowing seamlessly into the sequel. That’s a hell of an accomplishment and it’s rare for film franchise adaptations to be that effective. At least for a first issue.

I’m eager to read each future issue, but it also frustrates me to have to wait. For that reason I recommend waiting for the trade paperback and getting the full movie-like experience. But yeah, this is a great start.

On a personal note: I’m aware younger readers may not quite get it. If you’ve never seen the movie you should watch it first. If the movie does nothing for you then give this a pass. Also, you’s a ratchet.