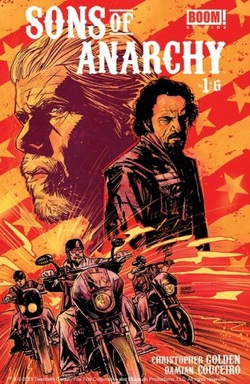 Sons of Anarchy (1 of 6)
4 out of 5 stars
BOOM! Studios
Written by: Christopher Golden
Art by: Damian Couceiro
Colors by Stephen Downer
Letters by (the one and only): Ed Dukeshire
Edited by: Dafna Pleban
Reviewer: David Paul

Note: There are 17 cover variants! If you are a serious collector that may be of interest to you.

Summary: With no one else to turn to, the daughter of an old SAMCRO member comes to Charming looking for help. The only people standing between Kendra and certain death are the Sons of Anarchy, and, for better or for worse, Sergeant-at-Arms Tig.

Review: Confession: I do not watch SONS OF ANARCHY. That’s a sin I’ve been meaning to rectify for a long time and I’m sure I will get around to it. It’s in my Netflix queue (like many others) so I’m sure I’ll get to it. I know saying that is like saying I never watched BREAKING BAD or (worse!) THE WALKING DEAD, but SOA is one of those shows I missed in its first season so I just put it off. Don’t crucify me.

Now that I’ve aired my crime let me say this about BOOM! Studios’ SONS OF ANARCHY: This is how you adapt a TV show to comics! If the show is anything like the comic, it’s as worthy of praise as they say.

From the very beginning of the story on page two we’re in for a hell of a ride when Kendra smacks Brody across the face with a whiskey bottle, shattering the bottle and splitting the man’s face open. To add insult to injury she kicks him in the head with a hard boot on her way out the door. Women! Am I right?

Brody’s got reason to be concerned apparently. Griggs wants to know the whereabouts of a few girls and all he was doing was looking out for Kendra’s safety, who decides she’s better off on the run. So she ditches Brody, ditches her phone, and hops a bus to Splitsville.

Opening this book I don’t know who these people are: Tig, Jax, Bobby, Chibs, or what the VooDoo Lounge is. But the Sons of Anarchy are on their way to deliver guns to Winslow and after those first few pages I am compelled to keep reading.

This is not only the way you adapt a TV show to comics, this is the way you open a comic book; give me a reason to keep reading. Tig watched his daughter burn to death? You better believe I’m gonna keep reading!

I should note here that if you are anything like me and you have not seen the show yet you should probably stop reading this review, as I am sure some of this should come with a SPOILER label. Speaking of spoilers, I am going to hold back on some of the story in this comic book. But I will say there’s a nice bar room brawl that I’m not sure isn’t par for the course regarding the show. I’d think that such a scene would be cliché but this really works.

In the end, setting up this series’ story arc, Kendra makes her way to Tig and doesn’t exactly make friends with Gemma. Oh yeah. I gotta read this series.

Once again, this is a hit from BOOM! Studios. There isn’t much from them I haven’t liked. In addressing the issues of the creative team I’ll start with Christopher Golden the writer. If you haven’t noticed I can’t criticize his work negatively. This script is really very solid. If it wasn’t an adaptation from TV it wouldn’t matter. I would still enjoy it. In fact it reminds me a little of some of the quality stories Kitchen Sink Press was publishing back in the day.

The artistic team of Damian Couceiro and Stephen Downer is inspired. BOOM! has done a fantastic job of carving out their own unique style and these guys fit the bill. Throw in the incomparable Ed Dukeshire on letters and what you’ve got is a quality comic book you don’t want to put down.

As a letterer myself I’d like to take a few paragraphs here about Dukeshire’s work: I’ve written before about one of my gripes with the mainstream is everything seems to be (over) produced by the same writers, the same artists, and the same letterers. One letterer in particular: Ed Dukeshire.

So many letterers today are only copying their style from Dukeshire’s extensive repertoire of work. Because I know his work I can look at a comic and recognize from the first page that it’s his. In the same way I can tell if it’s not his work but fashioned after his style. This is just wrong.

Letterers should not be penalized for developing their own unique look. Yet if they don’t all conform to that mainstream look they often lose out on work. And let’s face it: many are using Blambot and Comicraft to imitate Dukeshire (and a number of other classic professionals).

Of course Dukeshire can’t letter everything being published today. So I encourage editors and publishers to seek out letterers producing quality work who have their own style. If the Dukeshire style is what you want hire the man himself.
comments powered by Disqus
Powered by