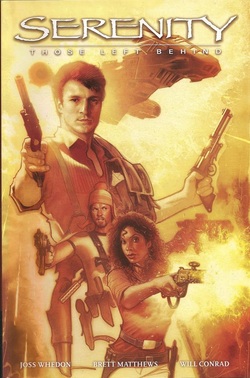 Summary: Stuck somewhere between the TV show Firefly, and the movie Serenity, this story tells the tale of our crew as they deal with the Hands of Blue and an old enemy of the past. Memories and feelings are brought back to the surface, and the crew must somehow scrape out alive. In the far flung future the guns you have are the guns on your ship, you need cunning to survive and any and all jobs are never off limits. This is the tale of Serenity.

Review: Okay, so pretty much every entertainment/nerdy fan in the cosmos has heard the rallying cry “In Whedon we trust,” generally referring to the best known of the Whedons, Joss. He’s created Buffy the Vampire Slayer, Angel, Firefly, and a host of others. If you’re not old of to remember any of those shows then get out right now (just kidding, please don’t leave me). No, if you’re not old enough to know those shows then you at least know him by the current Avengers films Marvel is currently putting out (Avengers, Avengers: Age of Ultron).

He’s sort of a big deal, if you haven’t caught on.

So, since I love Firefly just as much as everyone in the world does, why is it I have not felt such animosity towards a story in quite a long time like I have this one? Well to be frank, this story is so bad I don’t even want to consider it canon. This trade was published in 2007, and was meant to be a bridge between the show and the movie since there’s an obvious time skip when you watch the two back-to-back. So a lot of you have probably already had the chance to read this. If not, just don’t even bother with it. I will be spoiling from this point on.

The story, written mostly by Brett Matthews but also conceived by Joss Whedon himself reads like it was written by a fanboy who has one of two things going for him: 1. He’s got a very limited amount of time to cram as much stuff from the show as he wants into the story, so he chooses to include EVERYONE, or 2. He’s obviously never seen the show. Because other than a few bits of dialogue here and there I never really picked up on the vibe that I was supposed to be reading a lost episode from Firefly.

Each plot point in this is rushed and usually added in for no rhyme or reason, not even the bad guys are worth their salt. We get the return of the Hands of Blue and hell, even Dobs from the first episode of the show who wants revenge on Mal. I will admit, not ever getting to see the Hands of Blue really do much in Firefly was a cause for concern to their actual importance in the overall story, but seeing them here did no saving grace to their subplot. We see them only a few times and the “last” time we see them their “final battle” makes absolutely no sense and we’re never given a reason as to their sudden disappearance in the last pages. Dobs too, of all people to use as the secondary villain, is hyped up throughout the story as someone who is going to give Mal a fight to the death only for him to flounder and be killed off within seconds of meeting Mal.

Characters from Inara, to Book, to even Badger get some story in this even though not a single one of those three needed be here. And I get it, you’re a fan of the show, this may be the only time you’ll ever get to write anything related to the material so you want to put everyone in here. I totally understand that. But when your story is faulted and, dare I say, left behind because it’s overstocked with dozens of underused and unneeded characters, then it’s time to step back, take a look at yourself, and realize you probably need to take some people out.

The time frame in this book also doesn’t match up with the events of the series to the movie. Months have apparently passed since the last episode of Firefly to the opening shots of Serenity (the movie) and presumably Book and Inara have been gone for a while. We get to see why both leave the ship in this book, and in my opinion the story could’ve started without either of the two already on the ship. Book’s story is rushed and unbelievable. And Inara is just… here. She doesn’t do anything but complain and cry which is well out of her character. The story ends with the Operative from the movie getting the assignment to take out Mal’s crew, but did the Operative take months to get ready for his mission? Or did it really take the Alliance months to get news that the Hands of Blue had failed their mission?

It doesn’t make sense and we’re never given any context to it all. To be honest, I could sit here and rant all day about everything wrong with this book, but at the end of the day there’s only one conclusion I can come to: There is no saving Those Left Behind. “In Whedon I trust… sometimes.”

Final Score: 0 Hands of Blue out of 2

(Well, 5, but I thought I’d be cute)
comments powered by Disqus
Powered by