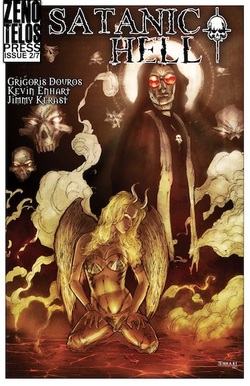 Summary: Satanic Hell plays their first gig in Texas to a packed and enthusiastic crowd. Despite misgivings from Exodus, the band warms to Texas as it realizes its music and image have become a hit in the repressed state. While Death Priest, Dante and Exodus have some fun in their new surroundings, the Texas Council of Churches grants Reverend Scudder “the authority to do whatever God deems necessary” to stop the tour and the spread of their growing fan base.

Review: Oooooh Yeah! Its time to get a little Satanic up in here! Well with out potential possession issues anyway. As you might recall in my review for the first issue. I felt a mix of annoyance and anger after having read it. While I don't feel that way with issue 2, I do still want to shake my head at it all. Even though at one point Grigoris' writing had me laughing. And you're liable to start laughing your head off as well once you come across some interesting porn names in the book. That is if you aren't the type who's easily offended or anything. If so, well don't say I didn't warn ya while reading this review. The art duties for this issue are all done very well. And certainly fit what's going on for this title. The colors help with that as well. Not to mention the cover's art work looks pretty fantastic as well. And gee Mr. Priest guy, why ya feel so threatened by The Beatles and girls with no bras? Its the new age bro! Get with it! Even if your name may sound like something that's Potato related. And giving someone the authority to do what 'God deems necessary' is a bit well.. Cause for concern really. As it gives this potential whacko named Scudder enough room to do as he pleases.

Granted, that's probably what his friends want. As you can tell, I'm clearly having a ton of fun with writing this. Grigoris does a great job with his writing, and it makes me wonder if its his intent to get folks wanting to mock Religion after having read this. At least to a point anyway. Issue 2 definitely gave us some more insight to the lives of various people we've met so far. Including the band. And uhh... If I ever came across a Nun like the one that shows up at one point in this book. Let's just say I'd be a little more willing to get 'Saved'. I loved how Death Priest's answer to a question the reporter asks him makes it seem like it explains everything regarding what kind of religion he has. At least for him anyway. And its something you all will also get a kick out of. And despite the fact I don't want to be curious on it, I still find myself wondering what kind of surgery these Religious types do if a girl is no longer a Virgin. As that doesn't sound fairly good. Grigoris' writing in issue 2 certainly seems to have blended together fairly well a mix of both serious and amusing. Which is probably why I'm not as annoyed or angry like I was in the first issue.

As this is just a darn enjoyable read. So dudes and dudettes.. Get out a large cross and fool some folks into thinking you're a saved person! Whoo!! I am curious if the band getting a hold of those tickets is some foreshadowing of potential chaos for the gathering they were invited too. Something to look forward to if I'm right! Those camps sound like they need some good bombing too. I'm up for it if anyone else is! You would have thought these oh so nice Texans would have learned from the horrors of History. Makes you wonder how the rest of America feels about the whole thing. I loved the reaction to Scudder's wanted poster. Guess it would save them some money when it comes making their next album cover! I bet the priest would certainly love that. I know I'd be wanting to raise some Hell! Oh, excuse me, I mean some Holiness! And as something of a Wu-Tang Clan fan, its nice to see a reference to them in here! Even if the reference is being used with something that most women would use for pleasure activities. I get the feeling though that sweet little Eva is going to be raising some Holiness herself soon. Take off that bra girl and give your old man a heart attack!

The interview at the end of this issue is a very nice touch. And gives the book even more of a slightly realistic feel. Especially considering the band is on a tour, even though it seems like the tour is in a state of Hell that I would never want to find myself in. As I mentioned earlier, this issue certainly gave us some nice insights to quite a few things. And its something I rather enjoyed. I think you'll also find yourself enjoying the interview as well. Unless you're still busy laughing your butt off from the Porn Store scene. Course, I don't blame any of you for that. I'm never going to be looking at the Virgin Mary the same way again!

So if you're down for some Heavy Metal fun with a bit of Satanic ritual mixed in. Or just wanting to see some Religious fanatics get messed over in various ways. Be sure to grab yourself a copy of this issue as soon as you can! Otherwise you're going to be missing out! I find myself looking very forward to seeing the next part of the tour. And with that said.. ROCK ON DUDES!
5 out of 5 Stars

Oh yeah, one more thing. Here's the link to the Satanic Hell's website. So hurry, hurry on to it and get yourself a copy of this issue! And the first one too in case you haven't already! http://www.satanichell.com/
comments powered by Disqus
Powered by