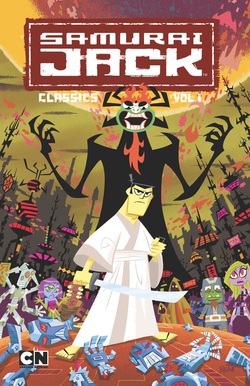 Summary: Jack is back! The hit TV show turned hit comic book returns in this collection of classic Samurai Jack stories. Kicking off with Jack's origin story and continuing through the first of his "Action Pack" tales, see Jack's first battle with Aku as the events that propel the entire series unfold! It's sword-swinging, fist-pumping, vengeance-getting action at its best.

Review: I recently learned a valuable lesson, and I’ll explain in a moment. But first -- a story!

Geeks everywhere have clamored for years over Joss Whedon getting his act together and delivering his version of Shakespeare’s classic “Much Ado About Nothing”. Finally the dream became a reality and said geeks (myself included) took in what we were sure was nothing less than Whedon awesomeness.

I may not be the most die-hard Whedon fan but throughout his career I have enjoyed much of his work (even Alien Resurrection). The man understands story-telling on an epic scale. He can turn the most obscure scenario into something not only believable, but relatable. That’s talent. But after watching “Nothing” I was conflicted. I was torn between loyalty and truth.

After sitting with it for some time and talking with my best friend (who is also a Whedon fan) I was forced to embrace the truth.

Fact is, I just do not like Whedon’s adaptation of “Nothing”. I don’t like any movie that takes a Shakespearean classic and thrusts it into the modern world. Not even Whedon’s. It just does not fit. And I so wanted to like that movie. But when the DVD features are better than the movie you know it’s a turd.

Lesson: loyalty belongs nowhere in an honest review. In that spirit let’s get on with it.

The only reason this collection is good at all is its source material. That said, there is absolutely no reason for this collection, as the stories are adapted from the series itself and brings nothing new.

Imagine you’re a Firefly/Serenity fan. As such, Joss Whedon can do no wrong. Perfect is perfect. And everything Whedon is perfect.

Apply the same delusion for Samurai Jack. Genndy Tartakovsky can do no wrong. Perfect is Perfect. And everything Tartakovsky is perfect.

Seeing through those kinds of lenses IDW’s Samurai Jack Classics Vol. 1 is perfect.

The only reason this comic book exists is for the fans. As a fan yes, it appeals to me. I’d own it because I love Samurai Jack. It’s possible those who have never seen the show may take a look at this book and add it to their Netflix queue. But as a fan who knows the show fairly well this is disappointing.