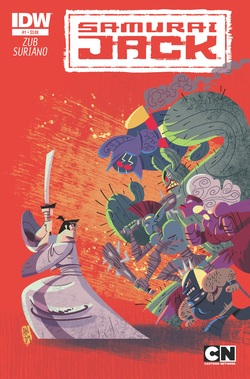 Note: My apologies to Rob for writing a review of this title. I think he’s written his own review but I hope he doesn’t mind posting another. Also, much thanks!

Summary: The legendary samurai known only as ‘Jack’ is stranded in a strange future ruled by the demonic wizard, Aku. His quest to return back to the past has tested him many times, but now the stakes are higher than ever. Can an ancient relic known as the Rope of Eons finally take him home?

Review: I should have known I was going to give this comic book 5 out of 5 stars when I begged Rob to let me read this title. It’s something I’m excited about as a fan of the original Cartoon Network series.

Let me clarify my rating system. No doubt you are familiar with the rating system on Netflix. This is the same.

From time to time I may even rate a comic book as “Not interested”, and while you will see many comics rated as high as 4 stars you will rarely see a rating as high as 5 stars. That’s how much I love SAMURAI JACK #1 from IDW Publishing. Let’s get into the “why”.

When adapting any TV show for comics it’s difficult to catch the genuine feel of that show. Meaning it’s hard to convey the feelings that show gives you when you watch it. But that’s exactly what the creative team of SAMURAI JACK #1 has done. They have tapped into my sense of nostalgia and capitalized on it to give me an extraordinarily enjoyable experience.

The introduction is there as it should be. When I read the words, “and undo the future that is Aku!” I could feel the show’s theme drop with a loud “wha’cha!”

“How to do that? Back to the past, Samurai Jack!”

You know the words!

A big part of the show’s forte was how it was able to pull you in without music. After the introduction we are drawn into a desert landscape. A distant figure approaches, sands being whipped about him by violent winds. I can hear that wind howling as the figure is revealed to be our hero and the title is unfurled in that chaotic wind:

“SAMURAI JACK AND THE THREADS OF TIME”.

As always Jack is looking for a way home. This time he seeks the aid of Soule the Seer, a mysterious mystic with an all too familiar headdress and a grizzled face. If you’re a fan of the show you already know what to expect, but it’s worth the adventure.

Soule tells Jack about the Threads of Time, remnants (fibers) of an artifact known as 'The Rope of Eons'. When Aku studied the sorcery of time travel he stole the Rope of Eons and mastered the “chronal knowledge within” and then destroyed the Rope to prevent others from using its magic. What was left over were the 'Threads of Time' and if Jack can bring these fibers together he can rewind his place in time. He is told that the closest fiber is on the far side of the desert, which he immediately sets out for.

The remainder of this comic book is full of the kinds of colorful characters and action which drives each episode of the series; always fun and memorable. There’s a red spider-thing that is a little too confident for its own good; a bevy of overconfident foes, including a cactus-thing and a robotic gladiator with a butt-gun. A BUTT-GUN!

In the end Jack collects the first thread, leaving us with the knowledge that this quest has just begun and a promise he will not waver.

As for the art of Andy Suriano you’re probably already aware of his work. Here he’s at the top of his game, perfectly imitating the style of the TV show. In fact I can imagine his work as storyboards for an episode of the series and we’ve been granted an audience for the pitch.

At worse this is a single episode (as proposed above). At best it’s a standalone movie. C’mon, Cartoon Network. Make it happen.

Editor's Note: The character with the butt gun is quite possibly up there with some of the most epic things I've ever seen!
comments powered by Disqus
Powered by