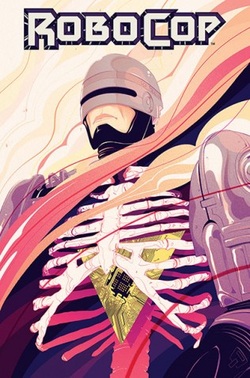 Summary: A deadly and charismatic criminal, Killian, is released from jail. He went into the slammer before RoboCop hit the streets. Now he wants to take out the biggest cop in the city. When OCP wants to take guns off the street, Killian sees it as his opportunity to take on the former Alex Murphy!

Review: Now, I'll be the first to admit that aside from a brief read featuring a cross over with the Terminator over at what I think was Dynamite, I've never read any other RoboCop comics. Whether or not that's a good or bad thing is entirely up to you. A review on this title by my good buddies over at Trash Mutant had me wanting to check out this new run from BOOM! and I'm happy to say I did read it. Matter of fact, I only really found one thing that was a bit disappointing, but I'll touch on that here in a little bit and its possible good tidings. I like that this is set after the first film, and although it seems like Joshua has no plans to use anything from the second and third films, I do wonder if he'll later decide to do so anyway. Although as seen in an interview, he really doesn't seem like a huge fan of the later movies. And the bad guys in this certainly help to show that no matter the universe, they are usually pretty idiotic. Shooting at a guy covered in armor after he punches out their boss' eyeball is just not smart thinking! But while an idiotic bad guy is a good thing, a smart bad guy is a whole entirely bad thing. Especially one who's been doing a little research on you!

I don't know what Joshua has in store with Killian, but I can only imagine its not going to be too pretty! As the man as mentioned before is smarter then the average scum bag RoboCop has to deal with. Killian going after his family is certainly one possibility we could see happen here. I like Carlos Magno's art in this book, along with Marissa Louise's colors as it all goes really well together. Giving it that 80's feel to a point that if I didn't know this was brand new, I might would have thought it came out back then. Magno certainly captures the likeness of everyone pretty well too, although with The Old Man, he looks pretty darn creepy! Wonder if that was something done intentionally? And as for Killian himself, I could have sworn there was another version of him that was used in another part of the RoboCop franchise, but I might be wrong in that thinking. Many thanks to Wikipedia either way!

Now as for the thing that bothered me a bit, was Lewis herself. Now I applaud her for wanting to get a better position in her career as its unlikely she would always be with Murphy til retirement or some such. But not wanting to talk about it with Murphy himself? Seems a bit cold to me. Although I could see Joshua aiming for a funny moment where its Manson who accidentally lets the cat out of the bag to Murphy. Bet that conversation would go well afterwards! But should she actually succeed in passing the exam, I could see this negating her potential death ala the third film if Joshua decides one day to use anything from that movie. Which may be unlikely as mentioned earlier. The Sarge getting some peace and quiet was something I found amusing, RoboCop using a picture of ED-209 for target practice was also pretty amusing as well. I can definitely see why he would do that! Though I wonder how Jones would feel about that? Likely would not be happy! Norton would likely love it a lot!

Have to wonder though if background checks aren't something those at OCP think about all that often as well. However, I think Joshua and the rest of the creative team are off to a good start with this, and I honestly look forward to seeing more of what they do with RoboCop. So if you've yet to read this, you are seriously missing out!
comments powered by Disqus
Powered by