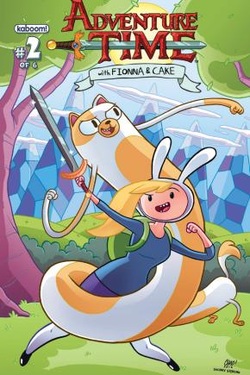 Summary: Fionna and Cake fight the Ice Queen. That’s about it. Also Fionna smells something funky in the backstory.

Review: Whereas Fionna & Cake #1 raise the bar high for what was gearing up to be an enjoyable series, #2 almost immediately drops that bar several stories by offering up little substance and dragging out one fight for an entire issue. We learn nothing more about the Ice Queen in this issue or anything else about the Fire Lions or the Fire Human that was with them really, the whole issue reads as one giant and admittedly lame fight. My kind words of Fionna & Cake last time were well deserved as last issue offered up many elements to the story and an interesting cliffhanger. This issue does none of that.

The dialogue is snappy as usual, I will admit which does raise the enjoyment factor a bit at least. I do enjoy some witty banter here and there and anything Adventure Time related tends to have that. Fionna is a character that I shouldn’t find adorable, since she’s a gender bend of Jake from AT proper, but man she rocks those red footy pajamas and socks. I do enjoy seeing her in all of this issue. Cake looks unflattering this entire issue, opting to remain as a big circular ball of mass the whole time. But throughout the whole issue the art is consistently strong and fully on par with what I have come to expect from an AT comic.

The second story covers Fionna smelling like a camel’s bottom and those around her attempting to get her to bathe to no avail. The story is heartfelt and kind of cute actually but I’m not sure it needs to be stretch into another issue for a second part. It reads more like a one-shot with not much ground left to cover. The art is decent for a back-up story but it didn’t really do anything for me.

Okay, it’s time to stop grasping at straws for this review. Sadly, there just isn’t a lot to say about this issue without dissecting every inch of it and giving away the entire book page by page. It’s one big fight and then a drawn-out side comic. It ends there and it doesn’t leave me wanting more sadly. I do hope Fionna & Cake #3 picks up the pace again at the halfway mark into this journey. I am very interested in the fire people and fire lions and how the original legend of the Fire Woman from last issue plays into this overall story.
Final Verdict: 1.5 Kitty Litter Swords of 5 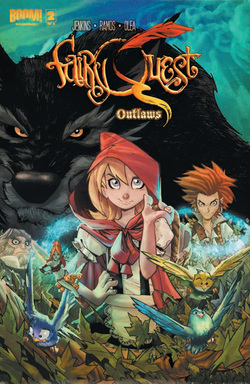 Summary: After fleeing Fablewood and escaping the sinister grasp of Mister Grimm, Red Riding Hood and the Big Bad Wolf find themselves hunted and on the run… and also in the confinement of one Peter Pan, you may have heard of him. Will they find their way into the mysterious Realworld or will they have to answer for their deviation from their story and have their memories wiped by Grimm? It’s issue #2 of FairyQuest!

Review: Whoa, this issue was spectacular! So much more ground was covered in this issue than in the previous one and we got to meet a lot more Fables that I hope we’re going to see again In the future. Which I suspect we will. I still have no idea how the whole timing of the stories works, like when are the Fables scheduled to perform their stories for the people of Realworld? Does it happen every single time a person around the world reads it? I do hope we get these answers eventually, I guess it really doesn’t need to be soon but definitely at some point. Otherwise we do get to see that any Fable deviating from their storyline does change the perception of how those in Realworld begin to read the story. And it seems it’s the adults who forget faster than those of an innocent mind do.

The idea is fascinating to me. Peter Pan and Red’s relationship is hinted at being something deeper, or at least as if it used to be. Yeah, they’re pretty young but oddly enough it doesn’t feel weird or forced and I am quite intrigued to find out what it is. By the way, Tink is a real b-hole, I will say that.

There are several other elements in this issue that make it worth wild and one particular page that had me almost crying as I realized what was going on and it only took one panel to do it. But I won’t spoil what that is. The writing here is, as you can tell solid all around, one problem I had with this issue is for those Fables who live outside of Fablewood but are still mainstays in popular fairy tales these days. How are they able to live out of Fablewood? What about them is so drastically different at this point that allows them to deviate from their story and live outside the designated town for stories? It’s all really confusing and I truly hope these aren’t just the kind of “accept them and go with it” kind of things. Rules have been established in this world, so don’t break them at your leisure unless there’s a reason we’ll be getting later.

The art in this issue is even better than last; Humerto Ramos is knocking it out of the park. I know for many his art can be too cartoony for them, and I will admit there are some comics I have read where I did enjoy his art as much as I have in others but I do feel his art style fits this world perfectly. It gives it that innocent charm that is definitely prevalent in this series which I love. We need more all ages, but very smart comics out there for kids to get into comics but still looking cartoony so it’s easy on the eyes.

All in all, a very solid second issue and I can’t wait to read more as I’m assuming things will be getting quite a bit darker from this point on (but still maintain that childish charm).
Final Score: 4 Lost Boys out of 5 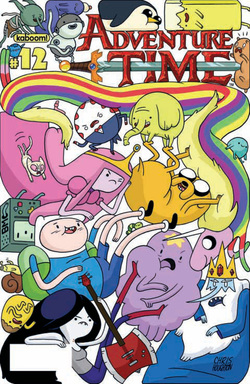 Summary: Following the events of the last episode where Jake, Finn and Marceline were playing through BMO’s game when he got hacked by a virus, this issue sees them seek out the wizard behind this nefarious scheme. The following hijinks are pretty darn funny if I do say so myself.

Review: This is going to be a spoiler-free Adventure Time review, in the past I would generally plot out every detail of the comic and then give my thoughts. But I am turning over a new leaf for my reviews much as I did with my Planet Nestor review a few days ago. This is not due to complaints or anything, simply I want to grow as a reviewer and allow the juicy bits of the comic to remain a mystery for those who read them.

Simply put, this comic was both awesome and a mixed bag for me. The main bulk of the issue actually consisted of two separate stories that really didn’t belong together. The first one, starring Lumpy Space Princess seemed more like filler to stall on the main story than anything. Where I did find it enjoyable, in the long run I’m not sure if will matter and thus will fade into the memories as the much more awesome second half of the comic kicked in.

The issue as a whole is still enjoyable to experience, the jokes and voices for the characters are spot on, and as someone with a sort of twisted sense of humor myself I can appreciate the smart writing it takes to make a dumb, yet witty joke. The dialog given too many characters within this issue are very… hip, or hipster I should say. Majority of it is lingo associated with today’s hipster culture but in a way that I did not find annoying but actually quite funny.

Like last time, the art here is strong and captures the essence of the TV show well. They chose a great team for this series. The spaghetti ligaments the characters are known for is actually quite appealing to me, it give sit that unique cartoon look that shows this is something different and whether you watch the show or read the comics is very much is a different experience.

In way, Adventure Time invokes that of being a 90s kid watching the old Nickelodeon and Cartoon Network shows of your while bouncing around today’s censorship of certain themes and topics.

The back story is something I do feel I should touch on before I go. As someone who hopes to one day make a living writing comics professionally, the mini comic in the back here on HOW to make mini comics was quite a treat and really drove home the information in a very clean, easy to digest way so that anyone reading this book will believe they can make a mini comic of their own. And they can, as this story illustrates, it’s actually very easy. And I think that sort of helpful tipping is just something we don’t see much of these days but is definitely something we need to see more of lurking around.
Final Verdict: 2.5 Wizards of our 5, yo.