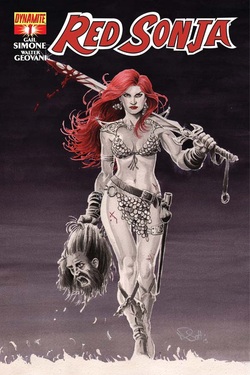 Why do I keep coming back to this character? Red Sonja just seems to keep popping into my review list, which is totally fine by me, as I rather enjoy this rip roarin vixen.There’s nothing quite like a ruthless red head to get the adrenaline pumpin, and Sonja is the holy mother of them all. She kills, she spills ( their blood), and she thrills!

She’s an amazon warrior with an attitude and plethora of weapons, in a land filled with hostile warlords, evil sorcery, strange creatures, and ancient myths. Just like her male counterpart. Conan the Barbarian, Sonja’s stories have always been adventure based, and loaded with action and fantasy.

Kills and thrills!
Synopsis:  Two young maidens beseech a sleeping Sonja in the woods, come to her aid and promote themselves as her personal body guards. They counsel her on the king’s dire need of her assistance and escort her to court, where she hears the King’s request from the man himself.

Sonja agrees to train his people against the inevitable invasion of a ruthless foreign army.

She sets herself to the task of educating the inept townspeople on the ways of war.

Never the less her training is cut short when the invaders arrive and threaten their lives and land.

Said King and a past victory! 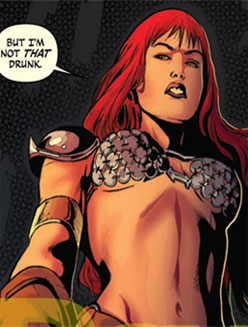 She can still walk with out stumbling around folks!
Review: Lets start by talking about the part that always grabs my attention first, the art. Artistically this book is very crisp and vibrant. I did enjoy the colors as well as the shading. It was nothing short of professional, and the same can be said for the pencils. They give us some great splash pages with close ups and lovely dynamic shots of our main character in all her feminine glory. I admire the posing and perspective on many panels in particular. Overall, quite nice work on the art.

Story wise, this is a smooth way to begin the series and enjoyable introduction to the characters and world.

Sonja is very outspoken and personalized in dialog, which I like, and she should be. The plot, although basic, tends to fulfill the requirement for an introductory as well as pave the road for adventures and drama to come. It’s a nice little slice of Sonja, but more content surely would have been preferable. So just like Sonja’s costume, this story is a little lacking in coverage.

Having said that, you do get a sense of scope, and impending dangers, but only a small sense.

I would hope for a little more drama from the get go, and or attention grabbing to start things off strong but, this seems to be an ease your way into it type of story.

It’s fun, and Sonja is definitely likeable, I just think she shouldn’t be the only interesting thing in the entire comic. At the end of the issue we are very briefly introduced to what looks like a major rival to Sonja, providing the reader with a good reason to acquire the next issue. For this issue however, it’s just a moderately interesting opening chapter. The writing did make me smile and give me a sense of subtle story telling talent so, I have high hopes for this series and expect an increase in excitement and intrigue.
7.5 otta 10

Boy, some really do get an up close view of someone's point.
comments powered by Disqus
Powered by