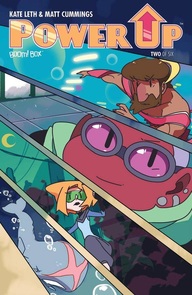 Summary: Amie Bloom is a 23 year old store clerk at a pet shop working under a stressful boss and simply going through life. She seems to have a good outlook on it though, and takes everything by the flow. Until one day she gets struck by a mysterious light along with one of the goldfish in her shop. After that, things became much more complicated...

Review: Power UP continues to poor its heart out as a love letter and more modern take on the magical girl genre in issue 2, where our main heroes all finally meet one another. And their first meet up goes pretty well actually, sure fighting monsters aside, it was really nice to see good guys getting along from the get-go instead of punching first and then asking questions later. Although to be fair, they do punch the bad guys first and then ask each other questions later... They just don't punch each other.

I'm really enjoying this comic and its love for all things magical. Amie is really relatable in her penguin onesie watching 8 hours of Netflix, I mean who hasn't done that before? Seriously though, I really like Amie and how truly different she is from your average, everyday heroine. She's spunky, relaxed and just nerdy enough to take all of this in stride while trying to also figure it all out. It's refreshing.

It will be very interesting to learn how each of them were effected by the mysterious light that gave each of them their powers – or in the case of Kevin who also got a costume out of the deal. Monsters popping up out of nowhere immediately following all of these “seemingly random” people getting powers, there's definitely a higher force at work here and it's going to be very interesting to see how it all ties together.

Given this series is only 6 issues, and the second issue was the “meet-up” issue, things are gonna have to start moving fast from this point on. Lest we be left on a cliffhanger at the end with no answers to speak of.

If you're not reading Power UP, I can already tell you to go check this out. It's fun-loving, with loveable characters, cheeky and the fights are pretty awesome. I mean seriously, Kevin's levitating lance is so cool. Go read Power UP!
Final Score: 4 Levitating Lances out of 5
comments powered by Disqus
Powered by