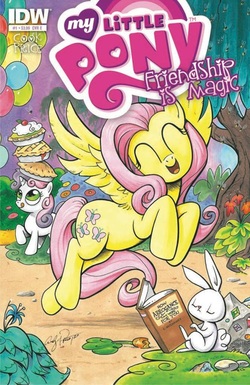 Summary: In this 4-part adventure, and hot off the heels of the MLP TV show, comes the continuing adventures of Twilight Sparkle, Rainbow Dash, Pinkie Pie, Fluttershy, Apple Jack and Rarity as they encounter the return of Queen Chrysalis and her vampiric, shape shifting pony army. As the Secretariat Comet looms overhead, an astronomical phenomenon capable of heightening the magic of Unicorn Ponies, the clock ticks for our girls to defeat Queen Chrysalis and save the world!

Review: I have to admit it, I am a Brony. For a very long time I wasn’t, and tried really hard to not watch the show, but it was hard to escape as I had many friends who were into the show so eventually I gave it a shot. I held out longer than I thought, given the show was in its 3rd season by the time I began watching. But in no time I had the series watched and up to date, and now as I sit here waiting for season 4 to begin, I am dipping my toes into the stories of the expanded universe.

These 4 issues when put all together feel like a 2-part story if I were to have watched it instead of read it. They were easy to breeze through, despite being heavily wordy and a lot of fun. The tone and character interaction certainly felt like I was watching the show, that it is obvious Cook is very much a fan of the show. She gets the characters and how they work, and the story structure is a lot like what you would see in the show as well so it feels right at home in the grand scheme of things.
One complaint I have though is that this was most definitely made for the fans who already know all of these characters and events that happened at the end of season 2 of the show. It doesn’t offer up much of a chance for people to get to know why these characters are so important or their history with one another. Instead it simply drops you into the story and goes from there, assuming you have prior knowledge to cross-media platform events. I would’ve liked to have seen one or even two pages dedicated to getting to know Equestria and the Ponies, maybe even a footnote saying “hey, this happened here, go watch it!”

The interaction between every character was fun and spot on, while the ending to this opening arc is pretty obvious it does help in understanding that in a children’s book, of course certain events will play out exactly the way you figured them to, so that’s what makes the journey all the fun. I was upset to see the Vampiric Pony army not get a lot of spot light time, the story sees Queen Chrysalis give Twilight and the gang 3 days to reach where she is set up and plotting in order to save the Cutie Mark Crusaders. But I kind of the think it would’ve been smarter to knock Twilight out and just bring her there, keep her alone, and suck out her emotions (like the Vampiric Ponies do) instead of going through all the trouble of this journey. But I guess if that had happened there really wouldn’t be much of a story. 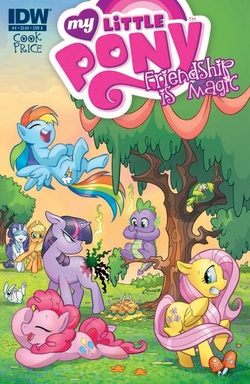 The art is gorgeous and I love looking at it, Price really knows how the show looks and is able to recreate it, albeit with a darker atmosphere due to the villain, making it look like a real extension to this world. There are tons of panels on each page though, and as I mentioned earlier these books can get really wordy. Which I’ll admit, the ponies talk a lot but yeesh… I honestly can’t decide whether I would’ve preferred more art over dialogue here.

Overall, this was a really solid outing for the MLP expanded universe and worthy sequel to Season 2 closer of the TV show, if you’re a fan of the show you’ll love this no doubt. If you aren’t, well you may still find this to be something worth checking out, just in case. Friendship is Magic right till the end, but the journey of what it means to be friends is what the story is really about.
Final Score: 4 Little Fillies out of 5
comments powered by Disqus
Powered by