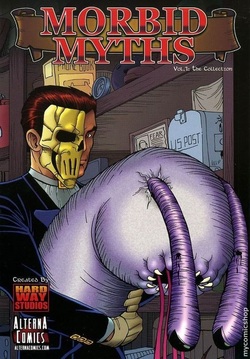 Summary: Following in the horror anthology tradition of "Tales from the Crypt", MORBID MYTHS is a collection of stories brought to you by Hard Way Studios. The mysterious narrator of the macabre, Job, will be your guide to 100 pages of bone-chilling and side-tickling horror.

Review: As we all know by now, we are in the month of October and that means all things Halloween! Or just scary and other kinds of fun things that tend to be related to the holiday! I feel ashamed of myself for not having read this book sooner. As such a fairly awesome piece of reading should have been done much sooner. Even if some of the events in the book were kind of gory in some ways. Not to mention kind of fun and outlandish in at least one of the stories. And to tell you the truth, I always thought the creature that the main character Job *Pronounced Jobe.* was holding on the cover was some bizarre stuffed animal. Boy was I wrong on that count! This title carries several stories in it, and all are fun to read. I just hope you aren't easily spooked! Even if you do want to scratch your head a little at some of what's going on. Or just shake your head at their stupidity. Seriously, have we learned nothing from the Candy Man films!? You'll see what I mean in the story called 'Mirror Image'. But sheesh.. You just know the girl's father is more then likely going to get the blame for that bit of bad news! And all cause of his daughter and her friend's desire to say a few words. Tsk tsk ladies! And for those of you haven't read this book yet, I hope you aren't the type who absolutely has to have colors in their comics. Cause aside from the cover work, this is otherwise devoid of colors. Which I do think helps give that occasional creepy vibe the writers do for the book.

Job himself is someone I find to be a bit of an eccentric person. And actually reminds me of the un-dead dude from 'Tales From The Crypt'. I can just see those two sitting down for Tea and talking about the most horrible happenings around like it was a casual every day thing. I do find myself curious on why part of his face has what I think is a skull mask on him. Is he going for a Phantom of the Opera type thing here or what? Oh well, best to not be too curious. Wouldn't want to be the unfortunate soul who lets his curiousity get the best of him around a really creepy smiley dude. Such as in the tale of 'The Box'. I have to wonder though if the mail man's boss is on some kind of scam with Mr. Box Man. Cause things just don't seem right with that guy either. The artists who were on this book also did a great job all through out it. I know I didn't have any complaints with their work. Which I know I wouldn't mind seeing more of. Along with more work from the writers. Especially in something that's more then a short story. One of the stories in the book I thought was fairly interesting, although a little nutty since the group were dedicated to a point of where they would actually go to a Library book's location just to bring it back due to it being late for return.

Talk about some serious dedication there. Although the book that was checked out really should have never been allowed out of the place to begin with. Seriously, lock those kinds of things up people! Otherwise you'll have to deal with nasty creatures, distorted reality, or angry bunny rabbits. And unless you got a big pack of carrots, you're liable to be out of luck. I feel sorry for one guy in this book, since he's likely going to Hell after what he does to himself just to escape a noise. Although I am curious on what was causing it. Dwayne Biddix does a great job in leaving that whole story with an open end due to unanswered questions. So if you're ready to sit down for a read that's liable to scare you. Then come on down and grab yourself a copy of this book. And if you already have it, share it with a friend! Besides, its the month of Halloween and all that. Something like this should get more notice. And would be interesting to see as a mini TV series of sorts. I could actually see Tales From The Crypt doing a great job with it if the show was still producing new things.
5 out of 5 Stars

To grab yourself a copy of this book, head on over to the Alterna Comics Website!