Here we are with the second part of the Mind Meld with Paul Birch and Gary Crutchley! In this part, WESTERNoir, some thoughts on Print vs. Digital, and other goodies get discused! If you missed out on the first part, simply click here! 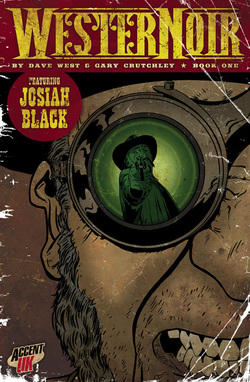 Werewolves!? I'm sold!
Rob: Gary, you mentioned working on a supernatural/horror western title for Accent UK, what can you (if able too) tell us about the book?

Gary: WESTERNoir is the story of Josiah Black; ex-gunfighter, ex-lawman who finds solace at the bottom of a whiskey bottle after his wife and son are brutally murdered. Searching for a purpose to his life he agrees to help a woman seek out the killer of her family and in doing so finds the world that he thought he knew so well, changed: monsters of legend roam the prairies - Vampires, Werewolves, Mermaids; creatures that have no Godly reason to exist. So, he is tasked by a mysterious stranger, going by the name of Caligary, with hunting down these creatures and killing them.

Originally conceived and written by Dave West who, along with Colin Mathieson, have for the past ten years published a variety of books under their AccentUK banner. AccentUK are quite well known in the UK for their annual themed anthologies and as I contributed to several of them I knew Dave and Colin quite well.

When the original artist decided he didn’t want to be involved in WESTERNoir and asked me to take over I was reluctant, mainly because I had so many other projects on the go and I didn’t really want to take on anything else. But when I finally read the first draft of the script I realised that this could be an intriguing book to work on. So I shuffled several projects around and told Dave that I was on board.

We’re telling Black’s story over eight 40 page books, split into two (4 book) story arcs. Books 1-3 are done and dusted and are available at AccentUK’s website: www.accentukcomics.com, and I’m halfway through the art of Book 4 and the script of Book 5. We want to end the first arc on a huge cliff-hanger to really surprise and shock the readers… But just what that is, well, that would be telling; folks will just have to find out for themselves.

We’ve got Matt Soffe colouring the covers and he makes my black and white art shine. I’m really pleased he agreed to work on the book. Visit his website at mygrimmbrother.blogspot.co.uk to see what a cracking artist he is. We have a terrific designer working on the book, Andy Bloor, who has worked on most of AccentUK books and really does raise them to another level. The printing is top notch and it all looks really great.

Even if I wasn’t so heavily involved in its production I’d be buying this book.

So far the reviews and feedback has been extremely positive and I’ve really enjoying the experience, which is funny considering I didn’t want to be involved with it at first. The only downside is that I’m so busy co-plotting, co-scripting, drawing and lettering these books that I’ve had to put everything on hold for the foreseeable future.

Rob: Wow, Gary, I certainly have got to say that WESTERNoir certainly has some appeal to me! Anything with werewolves in it is always a plus for me. And I imagine fellow reviewer Ross Rivers would love a chance to check it out as well!

Gary: Then I’ll certainly make sure you and Ross get copies, Rob.

Paul: You guys should also check out The Tale of a Well Hung Man that Gary drew for US publisher Lazy Bones Studios (www.lazybonesstudios.com) prior to WESTERNoir then; I hear they had some metallic cover editions at San Diego this year.

Gary is prolific, which is one of the reasons I asked him to be involved doing layouts for The Final Death Race, but until they clone him Frankenstein style, he can’t draw everything. WESTERNoir’s rightfully had praise heaped on it and I hear sales are good too, so I’m pleased for him, but it means some other things we are working on together were put on the backburner. The one being Hard Country, a western graphic novel that’s about two-thirds done – If you like WESTERNoir you will love Hard Country - I’ve the privilege of being involved editorially on this major work by Gary that was originally written by Andrew Elliottt, a man who could have gone on to have a career in comics comparable to Warren Ellis and Mark Millar’s as far as I’m concerned. And, more personally, there’s G.B.H. a series I created specifically with Gary in mind, that I really want us to do before I leave this mortal coil... Or will come back and haunt him over!

Gary: I plan to have all the art on Hard Country finished by the end of the year even if it won’t be published until late next year... I’ve got everything crossed that I can do it. 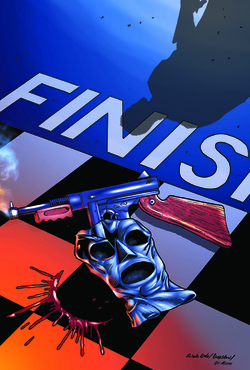 The cover for the 3rd issue of The Final Death Race!
Rob: When it comes to print versus digital, what are the thoughts of the two of you on this?

Paul: There are pluses and minuses. While marketing departments are instructed to tell us kids today want a quick fix and therefore instant gratification is best produced by digital applications, my take is those kids grow older and as we age our mindset goes into a nesting mode and we prefer to have tangible possessions. Therefore print is not about to die out, we’re just waiting for the salesmen to bump the price of it up even more once people accept paying a fair price digitally.

In terms of how they can be utilised as reading tools, that’s a whole different subject: paper, or printed matter in general, tends to be more personal, involving, and the story unfolds at your own personal pace. Digital matter tends to be a brisker read, the tendency is to sift through the information rather than engage yourself but if that’s the case the storytelling should work in conjunction with that – not necessarily veering off towards animation, though I have no problem with the motion book option, and the audio option is a good one too, but in terms of design in how the page or rather screen works. I can actually see a lot of potential in digital matter far more than is being utilised at present, but whether that will happen I wouldn’t try to guess.

Gary: With the amount of e-readers and tablets in circulation it would be daft not to capitalise what potentially could be a huge market. It certainly makes it more convenient downloading material down to these than PCs and laptops. And obviously loads of publishers are certainly taking advantage of the fact.

I have no issues with digital editions, I read digital and motion comics and books and I would be lost without my Kindle, but if I’m honest I do like to hold a physically printed comic in my sweaty little hands. Personal choice I suppose but I do like that touchy-feely thrill when you physically turn over every page of a comic book.

Paul: Me too. And of course, there are actually people who can hold engaging conversations about the smell of print from older comics... If you’ve got the smell of anything other than plastic from a tablet it’s probably smoke and about to ignite!

ComiXology being one example of an online source for Digital Comics.
Gary: In regards to WESTERNoir we tend to concentrate on the printed version of the book but that doesn’t mean we’ve neglected the digital side. All three books, as well as AccentUK’s considerable back catalogue including the sold out Zombies anthology are available to download from www.lushcomics.com at a reasonable price… Ok plug over.

Paul: A major European digital publisher asked me to produce some titles for it, and that’s one of the areas I am supposed to be exploring after Death Race concludes.

Rob: How long of a run can readers expect to enjoy of the Death Race comic?

Paul: That’s what I got on board for; then asked Gary to hitch a ride to. There was talk of a Machine Gun Joe one-shot following on from it, but right now my energies are focussed elsewhere, and some of those are comic related.
Editor's Note: This concludes the second portion of the Paul Birch and Gary Crutchley interview. But be sure to stay tuned for the 3rd and final portion!
comments powered by Disqus
Powered by