Here we are with the first Interview of many to come here on IndieComiX! And we're starting it off with none other than Kris Johnson of Bizarre Comics! Now.. Let's get it on!

1. First up, thanks for agreeing to this Kris! My first question for you to start things off with. Is that for those that aren't aware of what Bizarre Comics Entertainment is, can you give us an idea of what its all about?

Before I answer your question, let me just say that it's always my pleasure to interact with folks who dig our comics enough to ask questions about them. So thank YOU for reading and enjoying our stuff!

As for your question, Bizarre Comics Entertainment is the brainchild of myself and my longtime collaborator Rich "The Dick" Robbins, the genesis of which began as a kernel of an idea during Dick's high school years. We're primarily a comic book company, producing such titles as Private Dick, Lil Zomby, and the Jim Union (Spy Guy) graphic novel series, but we do other comic book related work as well, such as producing the Bizarre Comicast and logo design and lettering for outside clients.

With our publications we attempt to create books that have layered, serialized stories, well-rounded characters, and way more than the average serving of laughs you'd likely find on the racks of your LCS.

Bizarre Comics exists because we want to put the FUNNY back in "funny" books.

2. What initially inspired you and Rich Robbins to come up with the site?

No comic company worth their salt is without a website in this day and age, and I knew we'd need to have a web presence if we wanted to build an audience beyond local cons. Initially, we were only posting the LIL ZOMBY webcomic on there, but then came the podcast, followed by the odd, free full-length original comics we throw up there from time to time.

3. When I read the first issue of Private Dick, both yourself and Rich seemed very willing to push the envelop in that issue. What makes the two of you so willing to do so?

I'd attribute that to our influences. Dick is a huge fan of Fritz the Cat and Crumb in general, and we're both colossal whores for anything that's ever been produced by the gentlemen from Monty Python or The Kids in the Hall.  I'm also in love with every word that's ever come out of George Carlin's mouth.

In other words, ever artist we admire in the realm of comedy has been someone who pushes the envelope, and what society deems "acceptable", along with it.  We're firm believers in the thinking that if the punchline of a joke is funny, and the intention of that joke is not to harm, the contents of that joke, no matter how off-colour, can be forgiven… most of the time. Ha!

None of the jokes we make are done with malicious intent. We just want people to laugh, and we believe one of the best ways for people to let go of prejudices or long-held beliefs that are harmful to others are to poke fun at those things and laugh together about them. We also think penises are funny.

4. Can readers expect to see that sort of thing in all Bizarre titles?

Private Dick is the definitely the book where you'll find the majority of that. Our other titles set in the Private Dick Universe all feature a similar sensibility, but it's certainly most pronounced in the flagship book.

The only book we'll be putting out in the foreseeable future that'll be devoid of that stuff is an OGN focusing on a character name Cromwell, but that's not a comedy or set in the PDU.

5. In your opinion, have you found it easier to get your titles out to the masses due to all the advances technology has had over the years?

Absolutely. We're still working on getting our books onto as many digital platforms as possible (Comixology, etc.) but having comics like Private Dick and Spy Guy available digitally through pay services or Lil Zomby freely viewable on Facebook or our website has allowed us to immediately reach people all around the world who may've gone their whole lives without hearing about us otherwise. People like yourself!

We're a small company with very little funding based out of Canada. Without the internet it would've been very difficult to spread the word beyond the Toronto area I'd imagine.

6. And do you feel that print is in danger due to the digital age? Or just as strong as ever?

To be honest, we still do our best numbers selling physical copies at shows or through the website, so I think print, at least when it comes to comics, has a few good years left.

Marvel has done an awesome job giving people an extra incentive to continue purchasing physical comics with the introduction of their AR App and I believe all comic companies would be wise to adopt something similar as quickly as possible.

That said, I think it'd be foolish to say that print is just as strong as ever with so many major magazines and newspapers disappearing off the stands at an alarming rate, but comics are unique in many ways that will make them appeal to readers long after other forms of print are dead. And, at least for me, nothing can replace the experience of opening up a longbox, pulling out an old book, and thumbing through that sucker as that old comic smell hits your nose. That can't just be me, right? Haha!

7. In addition to coming up with great content for your comics. You also run a podcast. How often is that updated? And what can first time listeners expect?

The Bizarre Comicast is a weekly podcast that we try to produce four times a month, but, to be honest, we miss a week every once in a while! We're busy at Bizarre Comics, dammit!

As for first time listeners, we cover news and reviews from the world of comics and we're funny while we do it. They can expect more of the type of humor they get in our books, as evidenced by our fan-favorite opening segment The Dick of The Week in which each panel member lambastes the jerkiest character or industry luminary from the previous seven days. To set us even further apart from other comic podcasts out there we like to focus on other indie comics and companies as much as possible with reviews and interviews whenever we can get them. Being a VO actor I also break out an impression or two an episode just to keep people guessing. 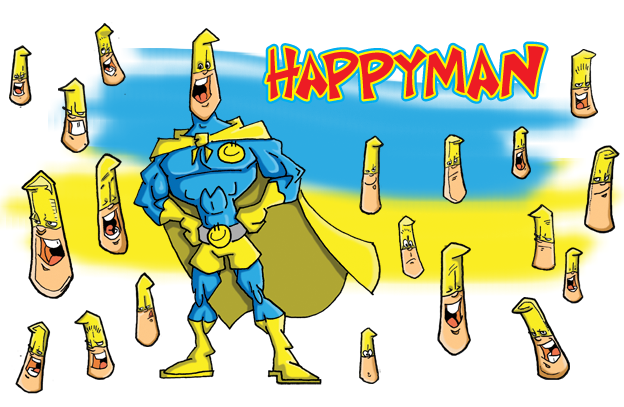 8. One of your titles is Lil Zomby, what makes this admittedly cute little zombie so different from others?

Well, there's a few things, I think. Lil Zomby talks and is intelligent for some weird reason. Also, I find when people create a cute zombie character they have a tendency to try to make them redeemable in some way, like they're just misunderstood or something.

Lil Zomby is not redeemable. In fact, he's a jerk. Everything he does is for his own amusement or to satisfy his hunger. He's not a nice little kid, and while he looks adorable he is well aware of that fact and will use it to his advantage at every opportunity. Yes, he may make a joke that causes you to put your guard down, but do not do it! He will eat your face if he gets the chance.

9. Is there also the possibility Lil Zomby will be collected in a trade paper back? Or will it primarily remain as an online web comic?

We're on a bit of a hiatus with LZ right now, but when we hit the 80th strip we have plans to collect it as a treasury.

Yes sir! We've been playing around with the Private Dick characters for a very long time and hope there's enough support for our titles that we'll be able to get around to our entire grand plan. One of the things that I think is so cool about Private Dick and Jim Union (Spy Guy) and the other books we have yet to get to, is that they're existing in one big shared universe and that universe has a lot going on in it. Our stories are not islands. They're not "done in ones" (even when they are). Everything is connected and has consequences. That's not to say you need to read every book to know what's going on, but you'll be rewarded with what we hope is a pretty rich experience if you do.

Something we thought was lacking with other "comedy" comics in the past was an overarching narrative. Something that kept you coming back over and over other than just the chuckles. We want to remedy that by making you laugh and by giving you an extremely satisfying epic storyline as well. We hope we're fortunate enough to find a large enough fan base to do just that for a very long time.

The plan is in place. We're not just throwing darts at board. This isn't the last two seasons of LOST.

11. For those trying to break into the Industry, what kind of advice would you give them?

While I've certainly done some work, I don't know if I've quite "broken in" myself yet, but I guess the best advice I can give is this: Make comics. No one is going to give you work just 'cause you're handsome, wear Axe Body Spray, or have a kick-ass Venom t-shirt. Think you should be given a crack at your favorite title? Show them you have the drive to make something all on your lonesome without a giant corporation backing you up first.

12. My final question to you good sir, and one I'm sure quite a few will be wanting to know the answer to as well. Is where will Bizarre Comics Entertainment be at in the coming months regarding Conventions and the like?

And we'd love to see everyone as well!  In 2013 We're hoping to hit a few more conventions than we have in the past, but we're still fairly limited in our reach, unfortunately. We'll definitely be at Toronto Comicon, Wizard World Toronto, and Fan Expo Toronto this year and hope to make our way to Chicago and New York as well. Keep an eye on our site's news feed at bizarrecomicsonline.com for up-to-date con happenings and store signings or listen to the Bizarre Comicast if that's more your bag!

Thanks again for your, questions, man.