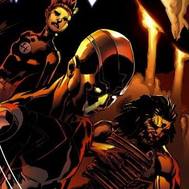 Hello there Joe! And welcome to the Mind Meld! For those who may not know of you, can you tell us a bit about yourself?

Sure. In the comics world I have worked for Marvel, DC, Image, Valiant, IDW, Dynamite as an artist and writer. I have penciled more #1 issues featuring Spider-Man and his cast than any other penciler. I make my living mostly by doing commercial art and storyboards nowadays, but my passion for the comics medium and my head full of big ideas keep bringing me back to comics.

I started publishing my comic book series, the NEW ZODIAX, in February of this year. NEW ZODIAX tells the epic tale of 12 characters who can channel the cosmic energies of the zodiac. Each of the first four issues debuts a new member of the cast, making them all collector’s items. Issue #1 sold out at the Diamond level. Issue #4 just came out in stores on Sept. 30.

You are the creator of the title known as the New Zodiax, what inspired you to create it?

I have always been interested in astrology, especially the origins of the symbols. Astrology began as the first science, really. Early in the process the observation of the stars began as a way to create a model toward living one’s one life. Over the centuries the symbols have changed. Libra is a relatively new sign. Before that there were two scorpions in the zodiac.

With NEW ZODIAX I am planning to modernize the signs for our current times. For example, everyone knows the Aquarius sign is the Water Bearer. Water is life, right? In today’s modern era, I’m taking the approach that information is life. What you know or don’t know can affect your way of life, or your life itself. The LIBERAIDER is the New Aquarius, the Information Bearer, who steals from the info rich and gives to the info poor. He considers himself the Robin Hood of Cyberspace.

The first 4 issues each feature a different member of the New Zodiax while continuing the story of the Liberaider who's going through some really interesting times. Will there be a big group meeting between the Zodiax members? Or will they all be kept separate from one another?

If you mean some kind of round table meeting a la the Avengers or the JLA, the NEW ZODIAX isn’t that kind of book. But I do plan to create a universe where the characters will definitely interact with one another, and their decisions will affect one another in positive or negative ways. 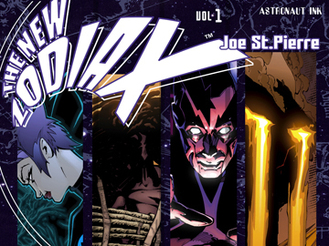 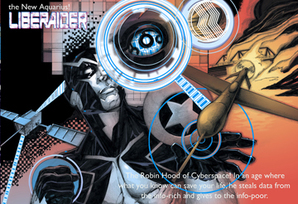 The Robin Hood of Cyberspace!
You've also got a Kickstarter going to bring the first four issues of the New Zodiax into graphic novel form, what's that experience been like for you?
​
Well the promotion part is a full time job. I am 83% funded with two weeks to go, so I would say so far it’s been an exciting and positive experience.

I can also speak as a buyer thru Kickstarter. I have contributed to something like a dozen Kickstarters, and still haven't received many of them. The NEW ZODIAX TPB is COMPLETE. It will be in your hands by the holiday. I think knowing that helps people get psyched for the TPB and contribute.

How far do you intend to take the New Zodiax? The universe you mentioned featuring them together and decisions that can affect them positively or negatively certainly does have some appeal as well I have to say!

Thanks, I agree things should really warm up once the characters start interacting. I have already planted seeds in the first four issues for two new major players as well. The NEW ZODIAX universe is very dense and I look forward to sharing it.
​
Right now I am a commercial artist by day, and NEW ZODIAX is something I do on the side. With reader and media support, NEW ZODIAX could become my day job, in which case the foundations are there for me to make 100+ issues. 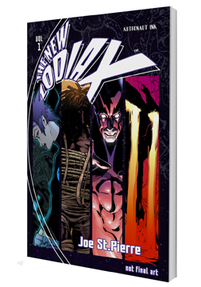 When you first learned that #1 had sold out at the Diamond level, what was some of the first thoughts you had running through your mind?

My friend Johnny Mangual at the Hall Of Comics was the guy to break the news to me. It was a great feeling, especially coming from him. But I also knew #1 issues are usually the best seller in an indie series, and that I had my work cut out for me to keep the sales up on subsequent issues.
​
I did my best to make each issue of NEW ZODIAX special. I introduced a new member of the cast in each of the first four issues. For example, #1 featured the New Aquarius (LIBERAIDER). #2 introduced the New Leo (THE LION). #3 introduced the New Pisces (CRICKET), and #4 introduced the New Sagittarius (MULTAA).

This made every issue of NEW ZODIAX a first appearance, and ideally a collector’s item.

When it comes to Print vs. Digital, what's your views on it?

I’m a print guy myself, but there is room for everybody! We need to spread the good Word and Picture. Whatever works, I support it. At the moment, NEW ZODIAX is available in print, and also on Comixology.

Where do you hope to be in the next 10 years?

It would be great to have 13 ongoing series, one for each member of the NEW ZODIAX, and maybe a team book as well. Each one would be celebrating their 10th anniversary ;) What do you think?
Sounds good to me! As for my final question, for those looking to join the industry or are just starting out, what advice would you give to them?

I guess it would be to be aware that even though there are more options for expressing yourself thru comics today than ever, the chances of making a living at it are very limited. Page rates have been stagnant for 20 years, if not lower. It’s a challenging time, but if comics is your passion you have to go for it! Feel free to follow me on social media and send links to your work, I will be glad to support you all, and hope you will do the same for me and NEW ZODIAX.

A final note: please support the NEW ZODIAX Kickstarter currently running. It assembles the first four issues of NEW ZODIAX, with about 20 pages of behind-the-scenes materials and cool stuff.

Thanks for helping Spread The New Z, Rob!
​
Happy to do so! So remember folks, be sure to donate!
comments powered by Disqus
Powered by