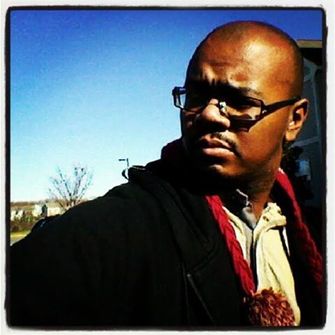 A wild Danny appeared!
1. Hello there and welcome to the Mind Meld! Now as for my first question, for those that may not know of you guys, could you tell a bit about yourselves?

DQ: Lol, thanks Rob. I'm Danny J Quick. I own 4th Wall Productions LLC. I'm a veteran who just got out of the US Army Reserves. I've been married 9 years and have 3 children... Oh and I write comics and film projects.

﻿RC:﻿ Hey I am Rich Cardoso, I am a heavy equipment operator by day soccer coach and digital colourist by night... I have 3 daughters aged 19, 12, and 10 and have been married for 23 years to my best friend.... When I'm not working on comics or honey do's I am very active in target archery (field)...

2. Excellent! Now the two of you work together on the Aceblade title, what led to you coming on board for the title Rich?

DQ: Honestly, It was our inker, Michael Kellar who suggested him. I was very new to creating comics then and I wanted people who really knew what they were doing and could teach me what to look for. I looked at his Deviantart page and knew that he could color, but once I messaged him and heard how honest and committed he was, I knew he would be the right guy. God has been putting the right people in place for us to get things done. People that we can trust.

RC: Well for me like Danny had mentioned it was through Mikey... He called me one day out of the blue and asked if I was working on anything.﻿. Mikey and I had worked together for a couple of projects before soo.... Numbers where exchanged, figures were agreed on, and we were off and running.﻿

3. Danny, Aceblade is set in Las Vegas. What gave you the idea to have the story set in a location like Vegas? And not something say like New York or California?

DQ: It's our fictional version of Las Vegas called "Vegas City". The creator of Aceblade, Christoph Hollars, wanted it to be Las Vegas initially because New York has been done over and over. We hope to someday go to Las Vegas and See Aceblade posters up, like they have for Spiderman in New York. Las Vegas was perfect for me to write about because I wanted Aceblade to fight against the greed inside of people and the way it effects the way we treat each other.

Also, we have another hero on the West coast close to California called Black Scorpion. He and Aceblade don't really get along...

4. I can definitely see why Christoph would want to set in a completely different city. As you mentioned Danny that Christoph is the creator of Aceblade. Is there any huge differences in how the two of you want to take the character?

DQ: Christoph sees Aceblade purely as a vigilante. A hard nosed heat-seeking missile that can take down any target. My Aceblade is a wise and vigilant master of his craft that knows how to break down any obstacle.

This works for character development though. In the Aceblade novel I've left room for Christoph's Aceblade to shine but he becomes my Aceblade over the first five years as the Vegas Vigilante. 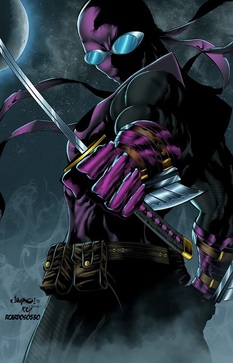 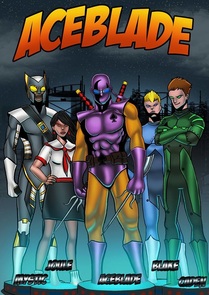 Aceblade and friends!
5. Rich, for however long Aceblade goes on. Is there plans for you to remain with the title for the forseeable future?

RC: Lol.... I'm not going anywhere I do a lot other stuff besides Aceblade.

DQ: Lol. Rich is my #1 colorist. I hope I can get him to stick around for the whole ride.

RC: Whole ride baby... I be sitting back in my sit saggin like a ganger.

6. It was mentioned earlier that Aceblade and another character called Black Scorpion have their differences with one another. Would this be in how they handle things?

DQ: Black Scorpion has deep trust issues that he's dealing with. At the time when he and Aceblade meet, Aceblade had a partner named Mystic who Black Scorpion believes is too young for "field work" and he doesn't think Aceblade is careful enough to keep his secrets secret.

They both learn something from each other by the end of that story, but they never really become friends.

7. Danny, you've currently got what is known as King Supreme running on Kickstarter right now. What can you tell us about that?

He will need more than just his super strength to get him out of it. You may also see Aceblade and a few SIC Squad Easter Eggs in the comic too. 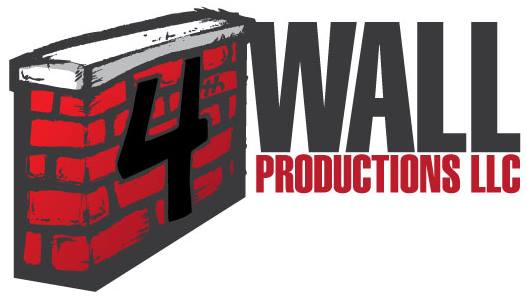 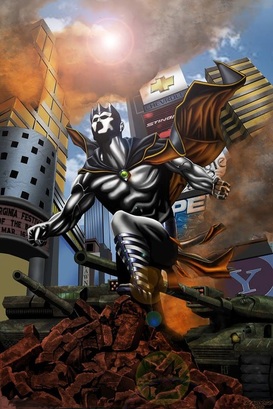 King Supreme!
8. Precarious Situation huh? Anything you can share with us about?

DQ: Yeah, Black Scorpion's story is a darker story. He has a lot of scars that are healing throughout his time with the SIC Squad and then when he goes off on his own in his city, Los Pacificos. It's more of a late teen/ adult story. It deals with trust, alcoholism, betrayal, and a plethora of super powered bad guys and gals that want to kill him. When he and Aceblade meet, he's at a very low point but he's driven to finish the mission because he has a deep rooted military background.

9. Rich, will you be involved in King Supreme?

RC: Sure if they want me to... As of right now all I have colored for KS is a poster/cover.

10. It was mentioned that Aceblade will be around in King Supreme. Which shows you guys have something of a shared universe in mind. Is this something you two find better to do rather then keeping it all separate?

DQ: All of our stories so far have been connected to each other. Every, short story, comic, and novel that we've released is canon. To me it makes it easier because most of these stories are about growing and how situations affect these characters. So Aceblade learns from all of these characters at different points. Black Scorpion shows him how to be more mindful of his security. LumberJax teaches him that there's more out there than just Vegas City. Mystic teaches him that it's okay to ask for help... And so on.

11. Danny, the Kickstarter for King Supreme was a fantastic success. Has its successful funding made you feel more at ease?

DQ: The Kickstarter was really stressful to go through, but it was worth it. All of us at 4th Wall have families and full time jobs, we are using our own money for these projects and it always feels good to have support and to know that someone outside of the company cares about what we are doing.

12. Where do you both hope to see yourselves in the next 10 years?

DQ: 10 years for now, if it's in The Plan, I hope to be working on films that continue these stories and to have The SIC Squad cartoon running on Saturday mornings. maybe in it's fourth season by then.

13. When it comes to Print vs. Digital, what are both of your thoughts on the two?

DQ: I'm a print guy, I have Black Scorpion sized trust issues with the cloud and digital landscape. I love working digitally, it serves a great purpose, but there's something about holding a comic in my hands that's more fulfilling to me.

14. For those new to the industry or looking to get into it. What advice would you two give?

DQ: Like Dory says, just keep swimming. Keep working on your craft and don't be afraid to ask for help.

Editor's Note: To stay up to date on all things 4th Wall Productions, head here to their Facebook page! 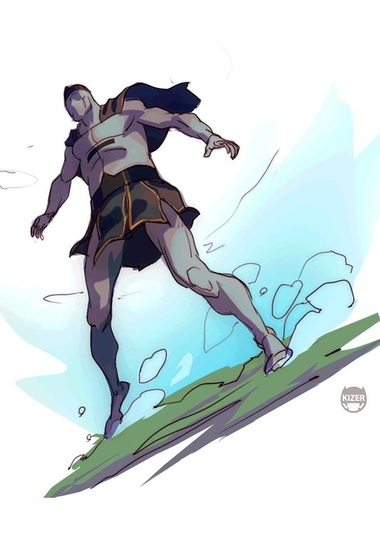