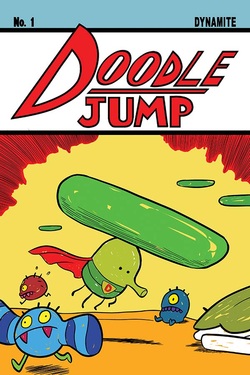 With your host, David Paul

I’m not exactly a household name. People aren’t perusing the nets, looking me up because they need to know everything about me. Don’t worry. I’ll forgive them. I’m awesome that way. But because people don’t know me they may stumble upon this column and wonder what the heck it’s all about. So let me recap.

People love comics. It’s true. But more than comics they love movies based on comics. Just ask Hollywood. David Paul, (that awesome guy who forgives people for not knowing who he is) reads a comic book and tells you if filmmakers should MAKE that comic book into a movie (because his awesome opinion matters), or if you should BREAK a bottle of (your choice of) flammable liquid over it and ignite that bitch.

Now that we’re all caught up let’s get on with it.

Dear God! What the hell is this thing? Whatever it is I hate it. Hate it. Hate it. Hate it. Dynamite has marred their otherwise good name by publishing this abortion. I’m pretty sure the publisher lost a bet. Or was exceptionally high while visiting Colorado. Someone went home, saw their four year old’s drawings on the refrigerator, took it into the office, gave it to an editor and demanded a letterer be assigned the task of ruining their own career by being associated with this.

Alright, let me try to make sense of this: After a marathon of poorly drawn Adult Swim cartoons and the worst Sega Genesis games ever imagined, little Meredith Gran (age 4) fell asleep in front of the TV and suffered a terrible nightmare in which some sort of Chibli was thrown into a world of ice and forced to fight Angry Penguins (patent pending) with the aid of a scared little Pokemon. She then woke up and assaulted everyone she knew until the publisher at Dynamite lost that infamous bet and now she’s a published comic book writer.

Did I mention I hate this thing? Next! 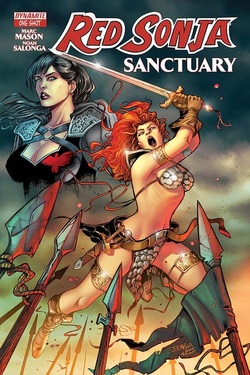 This is better. My faith in Dynamite is restored. With this title they prove they know a thing or two about publishing comics.

I love one shots. A complete story wrapped up nice and neat in one sitting. Like a good dinner it leaves you satisfied.

Back in the 90s when Lucy Lawless was at her best as Xena I often imagined what a Red Sonja TV show might be like. With Sanctuary I can now say this is what the show should be. As much as I’d like to see a good Red Sonja movie I think the character would benefit more from TV. Something unfiltered, like HBO or Netflix.

Sanctuary is really a character introspective. At this point in Sonja’s life she’s seen a lot of violence. Previously she tangled with Raven, a woman who killed Eleanor’s father, for which Eleanor swore revenge. When Sonja meets Eleanor again she is shocked to find her living an isolated life at a sanctuary for women known as Chrysalis, a place of peace. Even more jarring is the fact that Sonja’s former nemesis Raven is running the place.

The story doesn’t take you where you think it will. As Sonja investigates you think maybe this is some diabolical plot of Raven’s; that if something looks too good to be true it probably is. Instead it takes Sonja down the road of real peace, as she learns that Eleanor was able to forgive her father’s killer and Raven herself has turned from her life of violence. And just as Sonja starts to imagine what it would be like to embrace that life everything goes to hell.

I’m not going to spoil this one. Read it yourself and decide if this would make a better movie, or better as an episode of a TV series. You already know what I think. 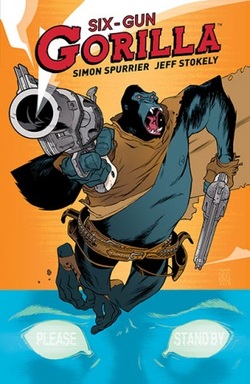 Okay. As the above verdict indicates I am obviously in love with this title. Hopefully you’ve already read this series (or TPB) and can agree this NEEDS TO BE A MOVIE NOW!

As a comic book there is simply nothing else like it. Six Gun Gorilla is the most imaginative and unique story in years. And it’s all about stories! Or, more specifically, it’s about the human need for story-telling.

For those of you who don’t know anything about it let me get you in the right frame of mind: imagine a time in the future when story-telling doesn’t really exist in any form. For entertainment all you have is a reality series, featuring real people sacrificing themselves via exile to a planet where they are forced to be part of a war and fight in that war until they die. As a severance the families of those who sacrificed themselves are then provided for, but that doesn’t really matter. What matters is the countless peons in need of entertainment and the companies controlling everything they see; companies who happen to be in cahoots with the military.

Our reluctant hero, who volunteers for the war because of, over all things, a broken heart, happens to suffer from something the companies won’t tolerate: imagination. When he finds himself face to face with the Six Gun Gorilla he is set on a path of discovery that threatens to topple society.

There’s not enough good I can write about this comic book. And as for a movie? If they remained true to the source material they would have a great movie. But they’d have to give it to the right filmmaker.

Until next time… peace, love, and grooviness.
comments powered by Disqus
Powered by