The horror haunts again Amigo Comics! After the success of the evil worshippers in The Westwood Witches, and the demonic possessions in Roman Ritual, we are proudly -as always- to introduce you the new horror masterpiece by El Torres: Straitjacket. A trip to the insanity, a peek on The Things that Lurk beyond Sanity. With the incredible art by the new hot artist Guillermo Sanna, we are sure you'd need a straitjacket after reading this scary first issue!

And as you know, we are re-soliciting Rogues! Odd Parenthood, so you still have time to order the first and second issues of the volume four, with the amazing art by Nacho Tenorio and Sergio Mora.

You should pre-order them before they run out! 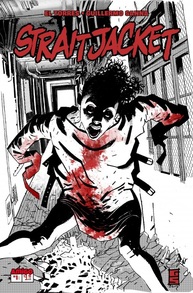 Enter into the world of Alexandra Wagner. She murdered her brother when she was child. She was institutionalized. Alex believes she protected of our world against “The Outer Darkness” with the help of her brother in the Otherside. Obviously, these are just deliriums, But, how… and why… she vanishes from the institution only to reappear later?

A new horror miniseries by El Torres, this time exploring the depths of a fancy, modern mental institution which hides more than a normal person could see... but Alexandra Wagner isn't normal. And her madness is the only thing that can save us.

Introducing the awesome art by Guillermo Sanna. "We wanted this book to look special", says El Torres, "and Guillermo came up with the idea to use just black, white and red tones. And it looks primal, scary. I always wanted to develop a horror comic in black and white, and the red tones introduces the mood I wanted to do with all the insanity we depict here."
Read the first pages here! 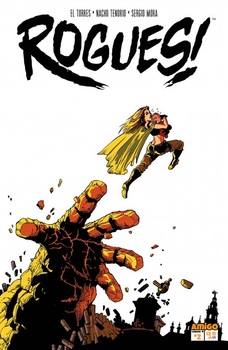 The evil concubine seduces an evil patrician who commands an evil man-at-arms who hires an evil wizard who summons an evil demon (of course he’s evil) who sends an evil earth elemental to kill that child… The child that the-not-so-evil (but sometimes wicked) Bram and Weasel are reluctantly guarding!

Nacho Tenorio (Army of Darkness, Dark Shadows) with Sergio Mora at the art, colors by Veronica R. Lopez and words by El Torres, all involved in an all-new story, with all-new characters of your not-so-all-new Rogues: Bram and Weasel! We are re-soliciting the entire miniseries -which can be read independently of the previous ones! 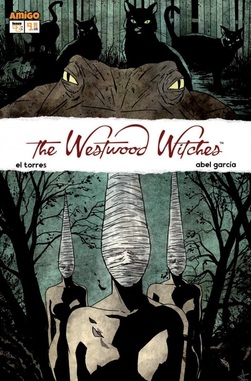 There is still time! Get The Westwood Witches TP!

“The Westwood Witches is a brilliant piece of thoughtful modern horror (…) El Torres writes with such a fresh angle and innovative detail that it feels like he is creating the genre.”
–The Pullbox

“It feels like it’s hard to find good horror comics nowadays, and The Westwood Witches is that salvation in these troubled times.”
–Cameron Hatheway, Bleeding Cool

“These women aren't your friendly neighborhood Wiccans. They are blood thirsty, sinister and insanely hot women channeling a greater darkness than you would imagine.”
-Christine Caprilozzi, Horror Network
comments powered by Disqus
Powered by