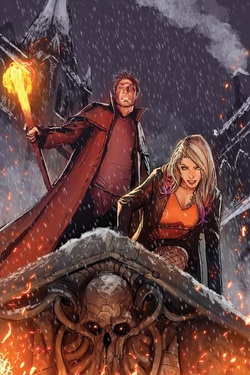 Summary: A bloody, clandestine War between the Red Court of Vampires and the White Council rages on. But nosferatu are far from the only supernatural threat Chicago’s only wizard for hire must stand against. The city is still filled with all manner of evil or desperate beings who are more than willing to victimize the innocent in pursuit of their own gain. Luckily, Harry Dresden is not without allies. He's taken on an apprentice, Molly Carpenter, a young woman of immense magical potential who often reminds Harry of himself - in both good and not so good ways. And though their relationship has been sorely tested over the past few years, Sergeant Karrin Murphy of the CPD remains a person Harry would go to the wall for.

Unfortunately, "Gentleman" Johnny Marcone, de facto ruler of the Chicago underworld, has grown more powerful. The first mortal signatory to the Unseelie Accords -- the governing laws of the supernatural world -- he is now the Baron of Chicago, and is determined to "protect" its citizens in his own ruthless manner.

Neither Harry, nor his friends, nor enemies such as Marcone realize that a threat to them all has come to the Windy City, and is about to make his presence known...

Review: For all you Dresden fans like me, these new original stories are wonderful with Jim at the core of them, so we know that they will remain true to the book series. For this issue and story arc Carlos and Mohan do some beautiful work here. Molly’s hair is expertly blended colour wise and the looks each character has fits with what I think of from the books.

So seeing the new big bad for this issue was a great introduction, it gives off that sense of menace and yet keeps the mystery about him intact. Also what happens to the pawn shoppe guy, yeah that’s pretty darn cool as well. But I think one of the big things that really excited me is that his story is one that takes place when Molly was still just training and still new at the use of her magic. So we go back in time a bit and get a better glimpse at the dynamic of their relationship.

For newer readers who aren’t as familiar with all the books there’s a great flashback here so that we can remember the circumstances of who Molly is and how she came to be, with Dresden making this story completely new reader friendly.

I can’t praise this first issue enough for the writing, dialogue, and narration. Not to mention the different characters, all of whom are among fan favorites. Also Harry’s relationship with his brother Thomas gets that special slant, the people working for Thomas think they are boyfriends which amuses both them and me. Murphy’s hard no nonsense attitude is fantastic and the end of the issue with Marcone, yeah, it all just plays to the subject matter's strength to draw the reader in and keep our attention.

By the way, I love Mouse. He’s such a great addition to the family and it pleases me to no end every time I get a chance to see him.

I urge everyone, whether you are a fan of Dresden or not to pick this up and give it a go. Magic, monsters, and complex interpersonal relationships this book is definitely a must read.
comments powered by Disqus
Powered by