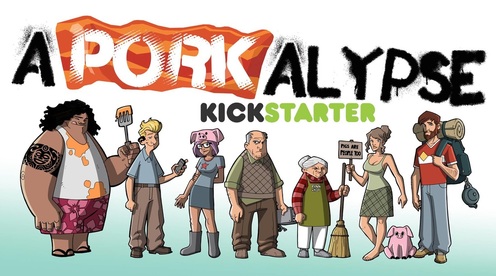 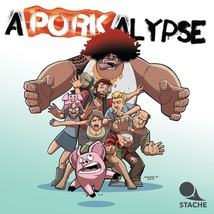 Indie comic publisher Stache takes on the end of the world with Aporkalypse, a collaborative anthology. In the post-apocalyptic humor comic, the shop owners of the Pig Plaza strip mall face a bigger obstacle than the end of civilization – each other.

“Aporkalypse was created as a pitch for a newspaper that was looking to add local talent to their comic strip assortment. Stache brainstormed and came up with a very generic 'sandbox' story, featuring seven very different, yet not very refined characters… and a pet pig. The story was simple. The apocalypse happened and destroyed everything on Earth, except for one lame strip mall that was built around a statue of a much larger pig,” said co-editor Jordan Williams. “We wanted to use the basic concept as a way to bring in other local comic creators to help mold these characters their own way and really showcase their work.Soon, creators from other states and countries were jumping on board. We decided to take these strips and create completely new short stories and then publish everything in a printed collection for comic readers everywhere.” The Aporkalypse trade-parperback contains 125 pages of short comics and strips by 35 creators. One of the Aporkalypse contributors is New York’s Ryan Burst, a moderator of the popular comiccollabs subreddit. Burst wrote an Asian pawnshop owner into a touching eight-page portrait called Some Things Never Change (Some Do).

“I was reading the different Aporkalypse strips and I was struck with the realization that the Mrs. Johnson character had an incredible amount of storytelling potential locked away behind the Chinese symbols she was confined to. For the anthology, it was an opportunity to explore her background and really delve into a character that has not gotten a lot of focus. I thought it would be interesting to compare and contrast Mrs. Johnson's early life with her life as we see it in the Aporkalypse world. And then, like any psychotic writer, I thought it would be funny to make her early life almost as miserable as it is now. Before you completely count me out, I would like to point out that the story is subtitled; Some things do, for good reason. I will let the readers take a gander themselves, but I hope I did justice by Mrs. Johnson by highlighting where her life has changed for the better,” explains Burst. For the anthology, comic illustrators adapted character concepts to their own particular style. Brazilian illustrator Daniel Franco teamed with first-time writer Rick Bloemer from Illinois on a short called Porkchop Punchout. In the comic, stranded British backpacker Bryan steps into the ring with The Chip, an Internet-addict dealing with the loss of his online fix.
“I was able to explore some new things on my work adapting these characters to my style. I wanted to get more ‘cartoonish’. I think I made some very important discoveries about how much I can adapt my drawings to other kinds of stories. Not to mention the square format of the page, which is not what I'm used to working with. In the end, it was a very good challenge to have and I am very happy with how things turned out,” said Franco on his collaboration.

A Kickstarter pre-sale is running during the month of September for the trade paperback anthology. Rewards include a Kickstarter exclusive hardcover edition and a cute pig beanie. A digital and print release will follow.

Head here to the Aporkalypse Kickstarter and donate today! 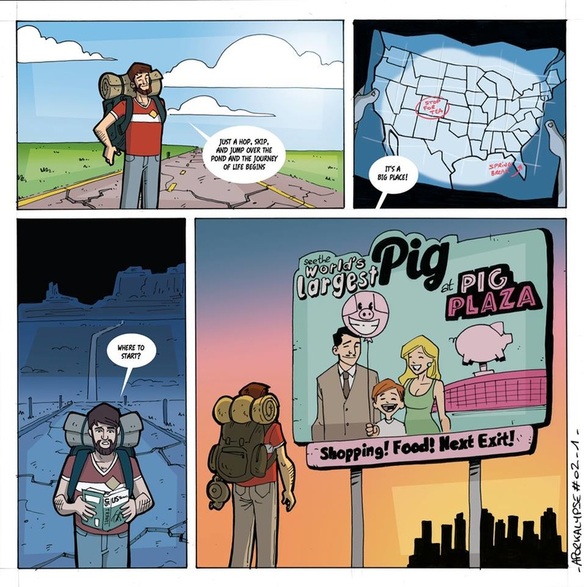